There are issues that some conservatives ardently embrace which, in their minds, make them “real conservatives,” distinguishing them from “faux conservatives,” to whom they have applied a myriad of pejorative labels and acronyms. In an ideal world, and at one time, those issues were workable and constituted a core component to the fabric of the American political structure. But in today’s environment, they are anachronistic and a return to them politically impossible, and implementation impractical. Consequently, those who incorrigibly and tenaciously hold to them may be more accurately defined as fatuous, rather than “far right.”

Some of these issues have been revisited in state Republican conventions around the country, most recently in Idaho’s last week. Some have been proposed or restated as planks in their respective state party platforms. But the salient question is, should they be?

Party platforms should be a terse couple of pages articulating the core principles of the party, not an idyllic “wish list” of fringe issues that are either anachronistic or impossible, and that restrict, rather than expand, the electoral appeal of the party. When fringe issues muddy the waters, only the inane will buy into inane planks, while mainstream voters question if they even belong with a group of such zealots detached from reality. 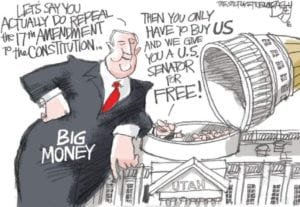 “Exhibit A” amongst these dubious issues is the proposed repeal of the 17th Amendment, which provided for direct election of Senators rather than by state legislators. This has nothing to do with “how conservative” or how “constitutional” one is. But it certainly is indicative of how specious ones ideology can be.

The 17th Amendment was passed overwhelmingly, and in near record time, by the requisite 36 states, because of corruption at the state level. That was in 1912. Ratified in 1913. Now, the crucial question is whether cronyism and corruption was more likely to occur then, versus now. It seems based on the continued deterioration of morality in the political realm, that cronyism, corruption, and the influence of money in politics is much more likely to occur now than it was then. Especially with the emergence of PACs (Political Action Committees) which have much less accountability to the people and even to the candidates, the ability to buy off a few state legislators is much greater than the cost to fund and shape the outcome of a direct election by millions of citizens.

Institutionalizing that corruption by repeal of the 17th Amendment is hardly a “constitutional” concept, and is arguably contrary to the core principles embedded in our founding documents. When cronyism, pecuniary influence in politics, and corruption at the state level is eradicated, then the 17th Amendment will be ripe for repeal. Until then, doing so will only prove that we’re insane, by trying the same thing again and again, expecting different results. 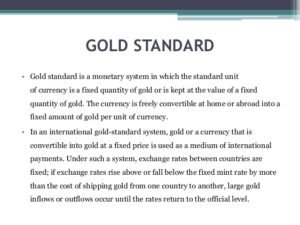 Exhibit B is no less questionable – the return to the gold standard. What led to the demise of the gold standard has relevance to today’s challenge to the dollar as the global reserve currency. During the late sixties, government spending grew significantly with the costs of the escalation of the Vietnam conflict and funding of LBJ’s Great Society programs. These were funded mostly by deficit spending, essentially charging the costs with a promise to pay for them in the future. This was extremely risky while the dollar was tied to the value of gold, for overspending and printing of dollars meant an excess of dollars in global circulation which could then be exchanged back to gold, depleting U.S. gold reserves.

This limited the extent to which Washington could deficit-spend, and caused inflationary pressures on the economy. With Washington lacking the fiscal discipline to control the spending, President Richard Nixon issued Executive Order 11615, which “closed the gold window,” making the dollar just another fiat currency with a free-floating value for global exchange.

While it was devastating to our monetary and fiscal policy (from a deficit spending and national debt standpoint) for Nixon to abandon it, it’s a genie that could never be put back in the bottle. To do so would either create massive hyperinflation (devaluation) of our current fiat currency, massive swings (politically rather than market driven) in the price of the metal, or create such a high conversion rate as to be nearly meaningless. 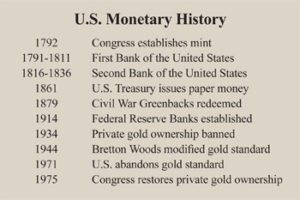 In all of my studies, and discussions with economists on the issue, I have yet to find a viable process to link the dollar back to the price of gold, reestablishing the gold standard. I honestly don’t think it could be done without devastating, and to a large extent, unintended consequences.

The solution lies in limitations on spending, debt, and deficit spending, perhaps through Article V Amendment process, since Washington has afforded no evidence that they can limit their appetite for the power (and cronyism) that comes from spending. Those are “conservative” issues. But re-linking the greenback to a limited precious metal is a pipe dream, and consequently, not an issue of ideological orientation, (i.e. “I’m more conservative than you because I support returning to the gold standard”). And I can ascertain no conceivable advantage to the party committing to something that is not only illogical, but likely impossible.

To many, these proposed planks in the Republican platform seem illogical, anachronistic, and divisive rather than broadening and inclusive. It would be preferable to have never abandoned the gold standard, and it would be ideal if graft had not corrupted American politics and created the need for the 17th Amendment.

The differences of opinion on unwinding these realities are genuine, but they have nothing to do with “how conservative” one is. Logically, it’s not the “far right” that’s responsible for these impractical planks, but simply ardent ideologues, regrettably validating the thesis that no party has a monopoly on historical ignorance or detachment from reality.

Support Conservative Daily News with a small donation via Paypal or credit card that will go towards supporting the news and commentary you've come to appreciate.
Tags
GOP Platform