As I was reading the New York Post, a headline caught my eye. Jumpers force Secret Service to raise White House fence. The story went on to say:

The Secret Service will raise the height of the White House security fence by five feet and add a new concrete foundation, in the wake of an uptick of people scaling it — including one this week. Along with the National Park Service, the Secret Service said it expected to begin building a “taller, stronger” fence to guard the White House grounds by 2018. “We have now a society that tends to want to jump over the fence and onto the 18 acres,” a Secret Service official said.

After I read it, I started thinking, what a bunch of lying hypocrites these Democrats are. They condemn the Republicans for wanting to build a wall along the Mexican boarder that would keep America safe by keeping Illegal’s out, and they also claim that a wall would not work, but making the fence higher around the White House would work and keep our president safe.

Democrats never did make any sense, that’s why I have been a Republican since I was 16 years old. Now that they have even moved farther to the left, they are pretty much a bunch of Socialists. Only an idiot would want to live in a country with open boarders, letting in terrorists, rapists and murders. Does Kathryn Steinle ring a bell? The woman who was shot by an illegal alien, a man who was deported five times but always found a way to sneak back in. What about the thousands who were killed by illegal’s driving drunk. What about the hundreds of girls who were raped by illegal’s?

Israel put up a fence and it works, let’s not forget The Berlin Wall, look how successful that was, that was built to keep people in, but it worked didn’t it, how about the Great Wall of China?  A long high wall works, the president knows it, I guess as long as he is safe it’s OK, but to hell with the American people. Vote Trump. 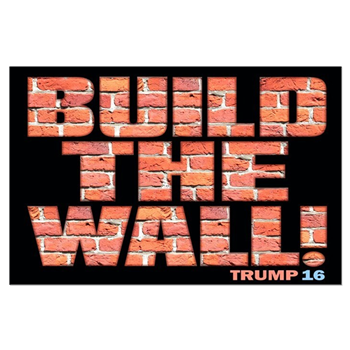 This is one man’s opinion