It must have been the result of what Boston Herald columnist Howie Carr derisively terms a “nationwide search.” AMC Theatres was looking for a new CEO and it hired Adam Aron. He’s not on the job three months before Aron unveils a new marketing strategy: Attracting 22–year–olds by driving off everyone aged 35 and over. 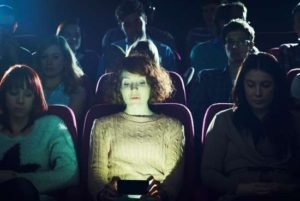 In an interview with Variety, Aron said “When you tell a 22-year-old to turn off the phone, don’t ruin the movie, they hear ‘please cut off your left arm above the elbow.’”

By the same token, when theatre management says it will allow texting in “selected theatres” people over 35 hear, “You don’t want my money anymore.”

Aron lacks a cinema background and it shows. His last job was running Starwood Hotels. The movie business there consists of seeing how much the company charge for cable pornography, while the customer’s movie watching experience is subject to, how shall I say it, a number of self–imposed distractions.

It’s a hands–on experience all right, but not a model management can apply to larger venues.

The only experience the vast majority of moviegoers want takes place on the big screen. Aron’s bright idea was to allow ticket–buyers (one can’t call them movie fans, because that implies they watch the movie) to text in “selected” theatres. Specifically, screens showing a feature attracting an audience with a mean I.Q. of 50.

Ask any contemporary service church pastor how well allowing “casual clothing” in the sanctuary has worked out. They expected slacks and polo shirts and what they got was outfits suitable for mowing the lawn.

Once the cellphone gets a pixel or two under the edge of the tent the rest of the unsocial, social media mob is sure to follow.

I have a sneaking suspicion Aron is much like the DC Metro board members who never rode the subway. One wonders how often he’s attended a movie at an AMC theatre?

Two things happen just before the feature begins: Seniors get up and make one last trip to the bathroom before the show starts, and then the lights go down. The idea behind darkening the interior is not to make it harder for gunmen to draw a bead on the audience — it’s to reduce distractions. Concentrating on the movie is easier when you can’t see your neighbor scratch himself out of the corner of your eye.

The second concentration aid is setting sound system volume on “stun.” After cost, the number one complaint of movie watchers is clueless loudmouths talking during the feature. Before the Age of High Self–Esteem and the $15 minimum wage there were employees called “ushers.” If people were talking or otherwise distracting audience members, the usher would shine a flashlight on them and the behavior would stop. Community standards gave a teenager the power to single–handedly control a packed house.

Since there are now no ushers or standards, management tries to drown out the verbal diarrhea demographic.

For normal people the entire cinema experience is built around reducing distractions, while Aron tried to add a new one.

Customers quickly realized there was no way, short of a flash grenade, to overpower the light from a cellphone. AMC’s social media accounts were soon flooded with negative feedback from patrons opposed to the idea.

A chastened Aron replied on Twitter, “NO TEXTING AT AMC. Won’t happen. You spoke. We listened. Quickly, that idea has been sent to the cutting room floor.”

One can only wonder, with more than a little apprehension, what Aron’s next bright idea — no pun intended — will be.

Support Conservative Daily News with a small donation via Paypal or credit card that will go towards supporting the news and commentary you've come to appreciate.
Tags
Adam Aron AMC Theatres texting