Most of us don’t normally associate tow truck drivers with humor. Anger, outrage, despair and generalized hostility, yes, but humor, no. That’s why the story from Fox News in Asheville, NC is so interesting. 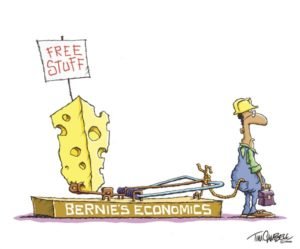 Tow truck driver Kenneth Shupe received a call to pick up a woman who was stranded beside her wrecked car. The tow was shaping up to be a routine rescue. Just the usual concerns about expense exacerbated by additional worry regarding what to say to the driver during the awkward ride to the shop.

Then, as he was completing his walk around Cass McWade’s disabled car, Shupe came to an abrupt halt near the rear bumper. He paused briefly and then purposefully strode to the front and unhooked McWade’s car. When she protested he explained that her Bernie Sanders sticker on the rear bumper meant she was “obviously a socialist.”

His parting words were if McWade wants help — she should call the government. As Shupe drove away, she was still fuming on the side of the road.

Later our forthright entrepreneur told reporters the mini–boycott was not a response to Sander’s campaign to appropriate the wealth, so much as it was an economic decision by Shupe who previously had painful experiences with car owners who believe in utopia. “Every business dealing in recent history with a socialist–minded person I have not gotten paid,” he explained. “Every time I deal with these people I get ‘Berned’ with an ‘e’ not a ‘u’.”

Evidently Shupe has a heart of gold in addition to being a perceptive judge of economic potential. In my experience every towing company treats everyone exactly the same — like dirt. Even ESPN reporters are forced to pay in full before driving off to enjoy a one–week suspension.

If Shupe isn’t getting paid it must be because he’s letting the collateral leave the lot.

Our damsel in distress could have looked on the bright side. Her car was wrecked before Shupe arrived. That’s more than the Trumpistas in Chicago could say after Bernie supporters smashed their windows as a penalty for displaying Trump bumper stickers.

Today America is the land of the boycott. There’s even an app called 2nd Vote that bills itself as the conservative shopping app. Users type in the name of the store and 2nd Vote returns a numerical rating on the store’s record regarding 2nd Amendment rights, corporate welfare, the environment, marriage and abortion.

Then it gives you recommendations for stores that have higher ratings, although in my view 7/11 isn’t going to be an adequate replacement for Macy’s, regardless of 2nd Vote’s opinion.

Sanders himself boycotted Israeli Prime Minister Benjamin Netanyahu’s address to Congress and then decided boycotting one Jew wasn’t enough, so he refused to appear at the AIPAC conference, too.

So Shupe’s individual, impromptu boycott with immediate consequences is part of a rich tradition of withholding your money from those you find odious. Although in this instance, Shupe’s principled stand cost him money.

Fortunately, that’s all it cost. If McWade had been on the way to a homosexual wedding, a sex change operation or a Target bathroom, Shupe could have been in real trouble. I doubt there’s a jury in the country that wouldn’t delight in ruling a tow truck driver had to pay the motorist.

Instead a local lawyer grit his teeth and admitted, “We may not like it and we may not agree with it but I don’t believe any laws were broken.”

McWade’s mother wasn’t so sanguine. She went on a — wait for it — Facebook rant and employed all the Trump accusations: “bigot,” “dumb (bad word)” and “(bad word).” In her haste to spew, mom wasn’t going to be troubled with something like accuracy. She blamed the wrong tow company for the Bernie boycott. Now that tow owner is fielding bomb threats and death threats from Bernie supporters whose cars are still drivable.

The entire affair pretty much sums up leftists and leftism in a nutshell: Make your politics, proclivities or pronouncements as public as possible and then demand there never be any consequences.

Support Conservative Daily News with a small donation via Paypal or credit card that will go towards supporting the news and commentary you've come to appreciate.
Tags
Kenneth Shupe Macy’s Politics