As of 11:15pm Donald Trump had more than 50% of the vote in almost all the voting districts in New York and near 60% of the entire state’s vote.

Certainly Trump was expected to dominate in his home state, but he came away with an even more impressive win than many were projecting. Analysts had expected the billionaire presidential candidate to pull in 65-75 delegates, but the math is looking even better for him tonight.

If a candidate in the GOP primary garners more than 50% of the vote in a district, they are awarded all three delegates for that district.

If the candidate gets more than 50% of the overall state vote, they are awarded 14 delegates.

In the case where no one pulls 50% of a district, the winner gets two delegates and the runner-up – if they get at least 20% of the vote – will get a single delegate from that district.

With all that in-mind, we go to the math:

There are 27 districts, each with 3 delegates to award. Donald has more than 50% in all but 4. Kasich seems to have secured a win in the 12th district, but with only 44.38% of the vote. Being conservative, that gives Trump 69 delegates from the district pool. Add that to his 14 statewide delegates and he has 83 delegates so far.With the remaining districts being close to finishing the count, it would appear that the last three will give Trump 2 delegates each for winning and 1 to Kasich as runner-up.

That gives Donald 90 of the 95 delegates, Kasich gets 5 which leaves Cruz with … zero.

And that leads us to the current pledged delegate count for the GOP nomination (734 delegates still outstanding): 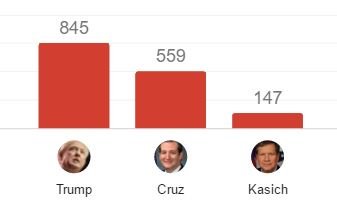 Kasich has been eliminated for quite some time and Cruz is on the edge of being mathematically eliminated from the 1st ballot (pledged delegate vote.) Remember though that Cruz’s strategy is simply to hold Trump to less than 1,237 delegates and force a second ballot during which the delegates he’s put in-place can then move to him.

Kasich’s strategy is the total upheaval of the Republican party. He can’t win on the first ballot, or the second or the third – soooo … get picked by the GOP elite after the delegates fail to select a nominee. Yeah, that’ll go over well.