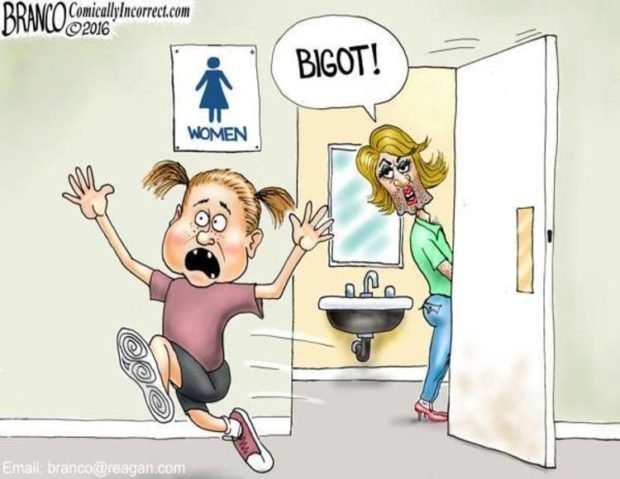 “Liberalism is a mental disorder”—Michael Savage

This whole  transgender BS being pushed down the American people’s throats by the liberal left wing agenda driven media whether they like it or not is nauseating me to no end.   The late radio talk show host Bob Grant was so right in saying “It’s sick out there and getting sicker.” I wish he were alive today as I’d love to hear his commentary on this transgender issue. I bet it wouldn’t be pretty.

I don’t mind if a person is born a man and undergoes surgery after much counseling to become a woman with all the working parts or a woman undergoes surgery to become a man like Chas Bono, but now it’s progressed to being purely what’s in your mind. My friend’s niece is a French teacher in a local high school and has a female transgender who insists on being called by a male name. I guess she’ll insist on using the men’s room also.

Now according to this insane logic If a woman is woman but thinks she’s a man she can use either bathroom. The same goes for a man who thinks he’s a woman,  he can use the ladies room. All they have to do is just think it. To these people I say if you are confused about what you are just look down below. If you have a penis you’re a man. If you have a vagina you’re a woman. Case closed period.

If all of this seems odd, that’s because it is.

It’s obviously logically incoherent, to begin with. The left insists that a man who believes he is a woman must be treated as one, even if his biology dictates that he is a male. GOPUSA – Your Daughter Must Pee Next to a Man, and You Will Be Compelled to Agree

When host Matt Lauer recently asked Donald Trump if he had any transgender people working in his organization, Trump said he wasn’t sure, but he probably did. He did say that he would have no problem letting transgender celebrity Caitlyn (Bruce) Jenner use whichever bathroom she wanted at Trump Tower.

“You know, there’s a big move to create new bathrooms. Problem with that is for transgender, that would be—first of all, I think that would be discriminatory in a certain way. That would be unbelievably expensive for businesses in the country. Leave it the way it is.”

Now Target is getting into the fray with saying men and women can use each other’s bathrooms and men can use their fitting rooms also. It’s one thing if you are in a small pizza place that only has one restroom like where I go or a doctor’s office, but a large dept. store like target that has restrooms for both men and women should stay that way. GOPUSA – Target Tells Customers that Transgenders Can Use Restroom, Fitting Room.

Recently North Carolina passed a law that says if you are a man you must use the men’s bathroom, if you are a woman, you must use the woman’s bathroom. Now even the NBA is getting into the act saying the states should allow men in women’s restrooms or no all star game. Commissioner Adam Silver believes the NBA has been “crystal clear” that the 2017 All-Star Game only stays in Charlotte if a North Carolina law goes.

Political and business leaders he’s spoken with in the state believe it will, so he’s holding off for now on setting any deadlines for when the NBA might act.

Silver said last week that the law that limits anti-discrimination protections for lesbian, gay and transgender people was “problematic” for the league, but he believed dialogue was more useful than ultimatums at this point, so has continued discussions with North Carolina officials. GOPUSA – NBA: Allow Men in Women’s Restrooms or Else No All-Star Game

Rocker Bruce Springsteen is cancelling one of his shows in Greensboro, North Carolina to protest the law and show solidarity to the transgender people he calls freedom fighters,” “Taking all of this into account, I feel that this is a time for me and the band to show solidarity for those freedom fighters. As a result, and with deepest apologies to our dedicated fans in Greensboro, we have canceled our show scheduled for Sunday, April 10th.”   I hope people who waited for months with tickets sue the pants off of him.  It’s one thing to have an opinion on something you feel passionate about, but he also has an obligation to his fans.

Which brings us to the next media overkill and that is with this gender bender rock star Prince. I remember selling his albums when I worked for Sam Goody Record stores in the 70’s and thought he was interesting but not great. I haven’t heard anything from him in over 20 years now and when I heard he had a new album coming out I said to myself,” Oh he’s still around?” Now with his death he is made bigger in death than he was in life. It’s all emotional mass hysteria brought on by the media and grief used to push an agenda. The media is elevating him up to almost saint status. There wasn’t this much commotion when John Lennon or Elvis died and they were 20 times better than this guy, but then again we didn’t have social media back then.

I couldn’t believe that FOX News spent six straight hours on him and nothing else on their news shows. They also keep changing their stories about how he died. First it was from the flu, then it was an overdose of percocets  he was taking for a weak hip he needed surgery on, now it’s back to natural causes and medical causes. I personally think it was from drugs  prescription or otherwise since he had OD’d before, but then the media elevated him to such high status they want to make him look like a decent friendly sympathetic guy so they are making it look like medical causes and not the drugs.

Bob Grant was right. “It’s sick out there and getting sicker.” Send in the doctor. Better yet, the undertaker.