There is no doubt in my mind and I am totally convinced that our society has gone completely mad. The lack of common sense these days just boggles my mind. When someone is born they are either a male or a female, God decides what we are, now it seems the politicians are trying to tell us what a persons physical sex actually is.

We now have states around the country trying to pass legislation to allow restrooms to be used by people who say they” identify” with a different biological sex then they were born to.  Which means that your 10 year old daughter or granddaughter will be using the same restroom as a 40 year old man, just because that man feels like a woman that day? Is there a person out there with half a brain that thinks that is right?

In Minnesota the legislators tried to pass a bill which says, “no claim of nontraditional identity or ‘sexual orientation’ may override another person’s right of privacy based on biological sex in public facilities such as restrooms, locker rooms, dressing rooms, and other similar places, which shall remain reserved for males or females as biologically defined.” In other words if you are born a female you use the ladies room, no matter what you think you indentify with today.

But Governor Mark Dayton of that state forcefully decried the legislation, calling it “appalling” and that he would veto it if it reached his desk. “This is about pandering to their extreme base,” Is this guy delusional, extreme base, how about a little common sense governor?

There are some states that are using a little common sense; North Carolina is the first state to require public school and university students to use only those bathrooms that match their birth certificates, according to the National Conference on State Legislatures.

Supporters say the new law protects all people from having to share bathrooms with people who make them feel unsafe. Advocates for gay, lesbian, bisexual and transgender rights say it demonizes them with bogus claims about bathroom risks.

Bogus claims they say. In New York there is a bar catering to homosexuals called the Stonewall, they have a “unisex bathroom.” Police are searching for a man suspected of sexually assaulting a transgender woman. Now I don’t know if a transgender woman is a man who thinks he is a woman, or a woman who thinks she is a man. Either way it sure doesn’t sound like bogus claims to me. Expect things like this to happen all over the country if we don’t get some sanity back.

The American Psychiatric Association (APA) still classifies transgenderism as Gender Identity Disorder, a recognized form of mental disturbance which should not be accepted as normal. For most teens, gender confusion is only temporary. According to the APA, 98 percent of gender-confused boys and 88 percent of gender-confused girls accept their biological sexual identity after passing through puberty.

There is no third sex. Regardless of how individuals might perceive themselves, they each remain biologically either a man or a woman. Accepting transgenderism in a child is a form of child abuse. This is according to the American College of Pediatricians, a professional organization of pediatricians whose leadership includes Dr. Paul McHugh, the former psychiatrist-in-chief at Johns Hopkins Hospital, one of the leading medical centers in the world.

The ACP quite correctly asserts that “facts – not ideology – determine reality.” The Bible asserts on its first page that there are just two genders – “male and female” – and not five, as homosexual activists want us to believe, or 58 like Facebook wants us to believe.

This biblical statement of the truth about gender identity is confirmed by biological science. Human sexuality is “binary by design.” Binary means there are two and only two options according to medical science – a child either has an “XY” chromosomal pattern or an “XX.” These are genetic markers which indicate God’s design for humanity and create the capacity for human reproduction.

Regardless of how individuals might perceive themselves, they each remain biologically either a man or a woman. Bruce Jenner was conceived a male, born a male and will remain a male until the day he dies. His tragic view of his own sexuality is a delusion.

It’s very simple, you are either born a male or female, if you think you are something else you have a mental problem and you should try to get some help. If people want to live that kind of life style, knock yourself out, but I shouldn’t be forced to except it and our children should not have to be exposed to it.  Parts of this was taken from GOPUSA. 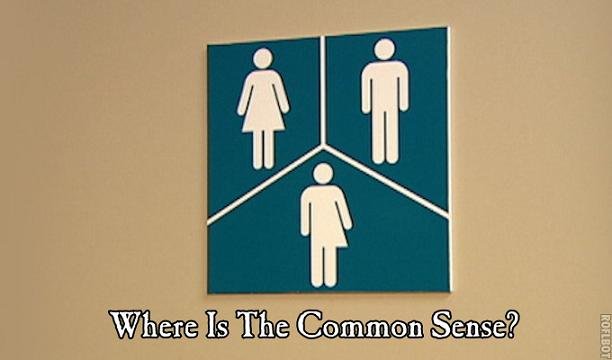