The discourse on the presidential race has devolved to a point that the most pressing issues seem totally lost in the verbal brawls between candidates. The economic threats and risks to the republic should be the centerpiece of the campaign, for both parties, rather than relegated to a footnote to their public statements. 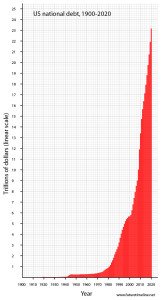 We have nearly $19 trillion in debt now as a nation. Eight years ago when it was $8 trillion, then candidate Barack Obama denounced the fiscal profligacy of such exorbitant debt, only to more than double it during his two terms. Even Hillary Clinton called it a “threat to our national security.” Why is this threat hardly even mentioned during this campaign?

Due to the massive debt being amassed by government spending, the role of the dollar as the global reserve currency is threatened. During the first five years of the Obama administration, our deficit spending exceeded $1 trillion per year. The first two of those years we were within a few hundred billion of spending twice what we were collecting in treasury receipts. The lack of discipline and fiscal responsibility in Washington led to a downgrade of the nation’s sea of debt by Standard & Poor’s. The ratings organization stated at the time, “Elected officials remain wary of tackling the structural issues required to effectively address the rising U.S. public debt burden in a manner consistent with a ‘AAA’ rating.”

Three years ago, Dick Bove, vice president of equity research at Rafferty Capital Markets said, “Generally speaking, it is not believed by the vast majority that the American dollar will be overthrown. But it will be, and this defrocking may occur in as short a period as five to 10 years… If the dollar loses status as the world’s most reliable currency, the United States will lose the right to print money to pay its debt. It will be forced to pay this debt.”

At the current rate of spending, the federal debt is projected by the Congressional Budget Office to be a staggering $24 trillion by 2020. Erskine Bowles, co-chair of the Simpson-Bowles Deficit Reduction Commission has calculated that service on the interest for that debt alone, if rates stay near current record lows, will be nearly $1 trillion! If interest rates rise, we’ll pay more. Very soon the largest line item spending category will be paying interest on our debt. More than welfare programs, more than defense spending, more than everything!

The General Accounting Office was explicit in its warning to the policy makers three years ago about our spending. They said in the very first paragraph, “GAO’s simulations continue to show escalating levels of debt that illustrate that the long-term fiscal outlook remains unsustainable.”

Yet we hardly hear a word about our onerous and debilitating debt. Nor do we hear much about economic growth, that is equally important as prudent fiscal policy. As Bill McGurn of the Wall Street Journal recently noted, “A growing economy means a growing standard of living. … That translates into more dreams fulfilled for more Americans, whether that means a college degree, a home in a decent neighborhood, or just the certainty that your children will do even better than you did.” 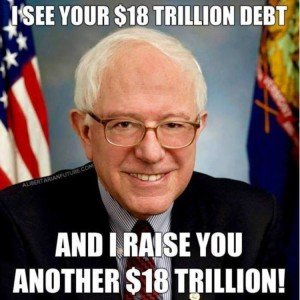 It’s no surprise for the Democrat candidates to not fret over the debt or economic growth. Bernie’s programs are calculated to cost $18 trillion themselves, and Hillary’s plans would require a 69% tax increase! Don’t expect economic reality from them. But the Republicans should know better.

To illustrate how critical economic growth is to the country. University of Chicago economist John Cochrane recently wrote that “sclerotic growth is the overriding economic issue of our time. From 1950 to 2000, the U.S. economy grew at an average rate of 3.5 percent per year. Since 2000, it has grown at half that rate, 1.7 percent.”

This is more important to the middle class than any other segment of the population, because as Cochrane points out, from 1952 to 2000, real income per person in the U.S. rose from $16,000 to $50,000. If the economy grew by only 2 percent per year over that period, rather than 3.5 percent, real incomes for the average person would have risen to only $23,000, not $50,000. That’s why average middle class incomes have actually declined since 2008 – a moribund economy with negligible growth.

And it’s organic economic growth we need, not questionable monetary-policy-based growth that we need. Arguably, the Federal Reserve’s “quantitative easing” has exacerbated the problem with regard to the debt hole we’re digging for ourselves.

Bond manager Jeffrey Gundlach, CEO of DoubleLine Capital, concurs. Gundlach says, “The slow-growth U.S. economy is living on cheap money as is the bull market, which is in its last stages.” He explains that the central bank is committed to “easy money,” referring to the accommodative low rate policy and quantitative easing. He calls these policies “circular financing schemes.”

The economy has not improved in any tangible way for the millions of Americans struggling with unemployment and underemployment. A healthy jobs market is crucial to strengthening the middle class, which currently exhibits a troubling lack of long-term stability. More people have dropped out of the work force than at any other time, and median household income continues to decline. A growing economy can solve this economic malaise.

There are other important issues as well. But these are the most crucial for survival of the republic, and having the wherewithal to provide for the defense of the realm. And what we need from our presidential aspirants is solutions to these critical issues. Whichever one of them starts to provide meaningful and realistic solutions should be the winner not only at the convention, but in November. I believe economist John Cochrane is exactly right. “Solving almost all our problems hinges on reestablishing robust economic growth.”