The vitriol heaped upon former GOP presidential candidate Mitt Romney this past week is entirely illogical and irrational. It only makes sense in the emotion-driven context prevailing during this election cycle. But alas, due to the prevailing emotional populist sentiment, logic has become the most obvious casualty of the primary election season. No wonder this is often referred to as the “silly season.”

Romney had the temerity to criticize the demeanor, abrasive and crass style, as well as some of the unpropitious statements by current Republican frontrunner, Donald Trump. “He creates scapegoats of Muslims and Mexican immigrants. He calls for the use of torture. He calls for killing the innocent children and family members of terrorists. He cheers assaults on protesters. He applauds the prospect of twisting the Constitution to limit First Amendment freedom of the press. This is the very brand of anger that has led other nations into the abyss,” Romney declared.

The former Massachusetts governor came short of endorsing one of the other three candidates in the GOP race, but discouraged Republican voters from supporting Trump. In doing so, he echoed the sentiments of many who claim affinity with an ABT approach to the primaries – Anyone But Trump.

Some of the critics of Romney’s interjection into the race have said he has no right to do so. Isn’t it ironic that those so critical of Romney think they can express their disdain, but Romney can’t? Can’t get much more duplicitous than that! Frankly, every citizen has that First Amendment right of free speech. One is not deprived of that right just because they’re a former candidate, or may have lost an election.

Should his opinion carry weight? Logically, as well as a matter of principle, one should think so. He’s carried the party banner, and did so with dignity and class. He’s a man of sound judgment and acumen, and sometimes those who have run and lost have a better grasp of the stakes than those who haven’t. He has a vested interest in the future of the country and the future of the Republican Party. Perhaps his words are ignored at our peril.

Others have criticized Romney saying he was a “horrible” candidate in 2012 running against Barack Obama. This begs the question, what is a good candidate? He had no skeletons in his closet, no moral turpitude, and he acted presidential. He is, in many ways, the antithesis of this year’s frontrunner. Maybe that says more about the party and how it’s changing, than it says about Romney.

That’s not to say he didn’t make faux pas’ as a candidate. His factual observation that 47% of the populace is on some kind of federal assistance didn’t help, and according to some political operatives, his refusal to go negative against Obama sealed his fate. Is that another component to being a “horrible” candidate? Refusing to go negative? If so, it certainly explains why many in the GOP are in full-fledged adulation mode with Trump. With him, it will be a surprise if and when he goes positive.

Perhaps the animosity directed toward Romney is merely transference because of the anti-establishment mentality prevalent during this election cycle. Even this is illogical since Romney was not the preferred “establishment” candidate either in ’08 (when he bowed out early) or in 2012.

As the Washington Post reminded us a year ago, “Romney wasn’t the first choice for many in the establishment. True, a few bigwigs were deeply committed to him from the start. But they hardly represented consensus opinion. That’s why we heard so many entreaties for other candidates to run.”

In an interview earlier this week, Chris Wallace asked Romney about the “establishment” allegation. Romney responded, “Establishment suggests there must be some Wizard of Oz somewhere pulling the strings. That’s not the way it works. I sat there and watched Donald Trump, and I said, look, someone has got to say something. I didn’t talk to anybody and say, ‘I’m going to do a speech, do you have some ideas?’ This is something I did on my own because I care very deeply about the country.”

What the establishment allegation against Romney does is create a whole new definition of the “establishment.” In this iteration, it’s everyone who doesn’t share the gutter-mentality, gutter-speech, and noncommittal ideology of Donald Trump.

Which brings us to arguably the most denunciatory claim made against Romney – that he’s a “loser.” This requires assessment of why he lost in 2012. As Rush Limbaugh explains it, “4.5 million to 5 million Republicans didn’t vote in 2012. This is the conventional wisdom and they didn’t vote because they didn’t like the nominee, he wasn’t conservative enough, or there was a religious component.” 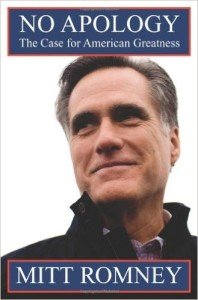 So was he conservative enough? Many in the establishment thought he was too conservative, hence their efforts to recruit and back more “mainstream” candidates. Further, anyone who read his book “No Apology,” knew where his priorities and his values were based. He did not lack in conservative fidelity! But as Rush points out, there likely was a bigotry issue with some who refused to back an LDS (Mormon) candidate. Their ecclesiastical purity trumped their love of country. That is unconscionable! Voting for a president is not an ecclesiastical endorsement!

Those verities translate into Romney’s critics perhaps being the real losers. If they didn’t bother to get behind him and vote four years ago, they’re the losers. Romney, and the nation, simply reaped the fruits of those who condemned us with another four years of “the One” by their imprudence and inaction.

The country missed one of the greatest opportunities for principled, conservative, and classy leadership four years ago. What a shame that he is maligned now for having the audacity to share his valid concerns for the future of the party and the nation!

Romney had every right to share his insights, and we simply prove yet again that we’re losers, as a party and as a nation, if we fail to listen to wisdom and reason, regardless of how much we may like or dislike the source.

Support Conservative Daily News with a small donation via Paypal or credit card that will go towards supporting the news and commentary you've come to appreciate.
Tags
2016 Presidential Election Mitt Romney