On the first day of the year, President Obama declared that he could “no longer sit around and do nothing about the epidemic of gun violence” in this country. The New York Times in December published a front-page editorial titled “End the Gun Epidemic in America.” But do we really have an “epidemic,” and at what point does hyperbole damage rational debate and resolution?

To illustrate how hyperbolic the notion of “epidemic of gun violence” is, let’s look at what real epidemics look like. Typhus, which spread throughout Europe during the Thirty Years War in the 1600s claimed over 10 million lives. It resurfaced during the 20th century, and caused several million deaths during WWI in Eastern Europe.

AIDS spread widely throughout the world in the 1980’s, and since that time it has taken the lives of more than 25 million people. The World Health Organization estimates that each year malaria causes 300 to 500 million infections and over 1 million deaths each year.

Smallpox is estimated to have killed 90 million Native Americans, and killed an estimated 400,000 Europeans per year at the end of the 18th century. Even as recently as the 1960s, it killed over two million people.

Those are epidemics, and are just a few of the top ten. Now for comparative purposes, let’s examine the “epidemic of gun violence” in the United States in the 21st century. 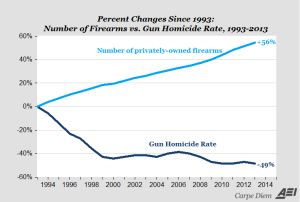 The report indicates that the vast majority of gun murders are committed with handguns, but the figures for all firearms declined as well. Rifles (including controversial “assault” style rifles) were used in 248 homicides last year, which is lower than the number committed with knives, “blunt objects,” (like baseball bats) and fists or feet. The overall murder rate was down 1.2% last year.

This seems to be following the general trend in violent crimes, which is also down 1% from the previous reporting year. Violent crime like robbery, aggravated assault, and property crime rates are all lower, year over year, and sharply lower in just the last ten years. The only violent crime rate that increased last year, according to the FBI, is rape, which increased 1.6% for 2014. Yet even that is down 10.9% over the past 10 years. 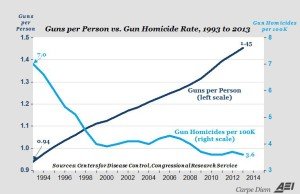 Not only do we not have an “epidemic” of gun violence, the gun violence rate is declining, and has been for the past 45 years according to FBI data. And this has been occurring during a period of American history when gun ownership has skyrocketed. According to the Congressional Research Service, gun ownership in the U.S. has gone from 185 million in 1993, to over 357 million in 2013. Even accounting for population growth, we’ve gone from .94 to 1.45 guns per person over that time. 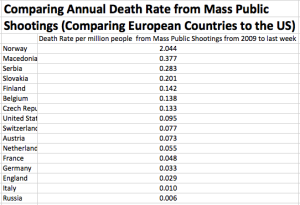 After the Charleston attack last June when nine people were gunned down in a church, President Obama declared, “We as a country will have to reckon with the fact that this type of mass violence does not happen in other advanced countries.  It doesn’t happen in other places with this kind of frequency.” Even that statement is nonfactual. What the FBI classifies as mass public shootings, where four or more people are killed in a public place, is in decline, in spite of the sensationalized reporting by the media and visceral reactions by the public.

A peer reviewed study by John Lott of the Crime Prevention Research Center and William M. Landes from the University of Chicago Law School, offers some insights into why the national firearm violent crime rate has been declining. “Overall, we find that states without right-to-carry laws had more deaths and injuries from multiple shootings per year (both in absolute numbers and on a per capita basis) during the 1977 to 1997 period. Note also that the number of states with right-to-carry laws increased from 8 to 31 and the percentage of the U.S. population in these states rose from 8.5 to 50 percent in this period. Yet, states without right-to-carry laws still account for the large majority (often around 90 percent) of deaths and injuries.”

Not only do we not have a “gun violence epidemic,” the data indicates the violent crime rate, including those using a firearm, is declining. Further, it would appear that there is a causal effect between the decline in gun-related murders and liberalized gun ownership laws. Perhaps the solution is not in additional gun control measures, but expanding right-to-carry laws where currently disallowed.

Associated Press award winning columnist Richard Larsen is President of Larsen Financial, a brokerage and financial planning firm in Pocatello, Idaho and is a graduate of Idaho State University with degrees in Political Science and History and coursework completed toward a Master’s in Public Administration. He can be reached at [email protected]leone.net.