Woe the Democrat leadership if their plan to coronate the wicked witch of New York/Arkansas as queen is in controversy with popular vote.

Bernie statistically tied the queen in Iowa and soundly crushed her in New Hampshire, so how is it that Clinton is leading Sanders in the count that matters – delegates.

Back in August, I mentioned that Hillary had already spent the appropriate amount of money and made the proper promises in royal circles to guarantee her the nomination.

The Clinton camp’s claim to more than 440 delegates means she’s already wrapped up the support of more than 60 percent of the approximately 713 superdelegates who, under party rules, are among those who cast votes for the nomination, along with delegates selected by rank-and-file voters in primaries and caucuses beginning next February.

So while Sanders continues to fill arenas, stadiums and halls while Hillary fills breakfast joints, Hillary is still leading the delegate count due to her paid-off and promised Wall Street-connected super delegates.

After only two contests where Sanders came out tied or ahead, here’s how the Associated Press sees it: 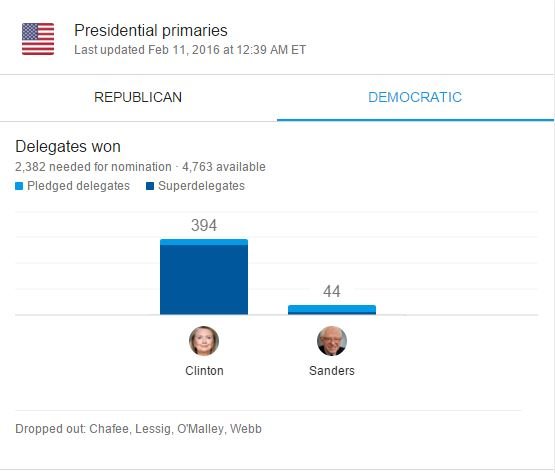 But it’s not a given that Democrats will rise up and contest their own party’s decision to crown the evil queen. With a history of falling in line and cowering to the government, they are likely to just let Bernie fade away after burning bright.

Support Conservative Daily News with a small donation via Paypal or credit card that will go towards supporting the news and commentary you've come to appreciate.
Tags
Bernie Sanders Hillary Clinton