How the Liberal mind thinks is beyond any type of common sense. For many years someone selling crack cocaine received a harsher sentence then someone who sold powder cocaine, but because more blacks sold crack cocaine it was called racist, so they made the prison term less. The Oscars did not include any black performers, so they were called racists, instead of saying better luck next year. In schools blacks are getting suspended more than whites by 10 fold, so what do they do, raise the bar for what deserves a suspension. Instead they give the child a card that says they should go home and discuss what they did with their parents, that’s if they have any.

Now in New York City they are decriminalizing peeing in the street because more blacks seem to be doing it. Does any of this make any sense to you?

New York City’s city council is set to dilute a host of criminal laws including laws against public urination and excessive noise because council members believe too many members of minorities are getting arrested.

The New York Police Department already relaxed its enforcement of many quality-of-life laws after years of enforcing exactly such laws led to record lows of crime in the once-much-grittier city, reports The New York Times,

“We know that the system has been really rigged against communities of color in particular,” council member Melissa Mark-Viverito, a Democrat, told the Times. “So the question has always been, what can we do in this job to minimize unnecessary interaction with the criminal justice system, so that these young people can really fulfill their potential?”

Instead of teaching blacks not to be criminals, they just take away the punishment, that’s the Liberal mind at work, no wonder this country is so screwed up. I bet they think this article is racist. 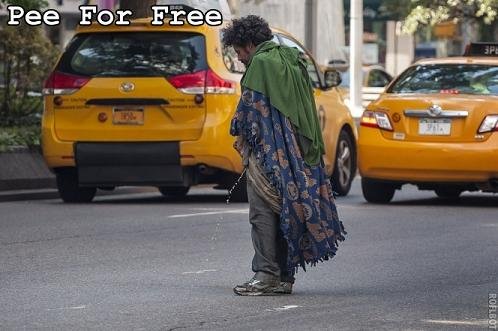