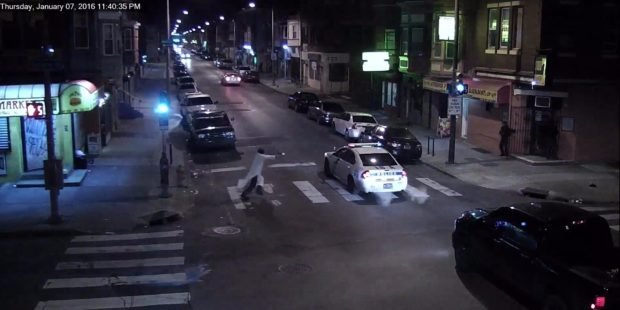 After the Charlie Hebdo attacks Obama called ISIS the J V team. Later on he said ISIS has been contained.

Then that night they struck in France killing over 100 people. Then we had San Bernadino by two ISIS supporting people. Now we have this attack in Philadelphia by a guy claiming he shot the cop in the name of Islam and Allah and belonged to ISIS.

The Islamic State has recruited thousands of supporters in the United States, far more than previously thought, according to a scathing new report, raising the likelihood that supporters of the terrorist army could be plotting attacks similar to those carried out in Paris. The report accuses Obama of “downplaying” the threat of ISIS while adding to the threat by importing Muslim refugees that are difficult to screen.

The U.S. has imported 70,000 refugees per year for many years, more than half of them from Muslim-dominated countries such as Somalia and Iraq with active jihadist movements, and President Obama has pledged to increase that number to 85,000 this year and 100,000 the following year. Thousands’ of ISIS fighters now inside U.S. cities

Now a man using a gun stolen from police in 2013 dressed in Muslim garb said he was acting in the name of Islam when he ambushed an officer sitting in his marked cruiser at an intersection, firing shots at point-blank range, authorities said Friday. Both the officer and suspect were injured during the barrage of gunfire.

The suspect, 30-year-old Edward Archer, also pledged allegiance to the Islamic State group when he was questioned after his arrest in the shooting late Thursday, police said.

Milwaukee Sheriff David Clark said on Sean Hannity’s show last night that ,”This individual should be charged with treason, his rights taken away, charged by a military court in GITMO and executed.” Clark went on to say that “this president is unwilling to face the fact that we are under attack here in the homeland and is incapable of protecting Americans.”

Archer’s mother, Valerie Holliday, told The Philadelphia Inquirer he has been hearing voices recently and that family  asked him to get help. She also described him as devout Muslim.

Suspect, Edward Archer, 30, gave a written confession to Thursday’s attempted killing of 33-year-old police offer Jesse Hartnett. He fired 13 rounds from a gun that was stolen in 2013, striking Hartnett three times as he sat in his cruiser,  WND reported.

Archer was not the only Islamic radical taken into custody on Thursday. Two Iraq refugees were arrested in Houston and Sacramento by law enforcement officials on terror-related charges,

“According to him, police bend laws that are contrary to the teachings of the Quran,” Ross said during a press conference Friday.

Two other  Muslims were arrested  on the same day. Mohammed Younis Al-Jayab, 23, is charged with making a false statement involving international terrorism. He has lived in the U.S. since October 2012.

Omar Faraj Saeed Al Hardan, 24, is charged with attempting to provide material support to ISIS. The Houston resident has lived in the U.S. since 2009.

According to the allegations, he(Hardan) also knowingly responded, certified and swore untruthfully on his formal application when applying to become a naturalized U.S. citizen. He allegedly represented that he was not associated with a terrorist organization when, in fact, he associated with members and sympathizers of ISIL throughout 2014, according to the charges.”

Just in case you thought your eyes are deceiving you, they’re not: the United States actually thinks it can stop refugees by asking them on immigration forms whether they are part of a terrorist organization.

Somehow, Al Hardan managed to outsmart authorities by lying. Who could have possibly foreseen that happening?

The indictment further alleges that during an interview in October 2015, Al Hardan falsely represented that he had never received any type of weapons training, when he allegedly received automatic machine gun training.”

Sadly, Al Hardan isn’t the only refugee who’s mastered the dark art of not telling federal authorities the truth. The Sacramento Bee says that another Iraqi refugee, Aws Mohamed Younis Al-Jayab, has been arrested in California for lying about his involvement with the Islamic State group and his travels within Syria.

While the president and his administration continue to scratch their heads over how these two could have outwitted a national security dragnet that relies on terrorists telling the truth, Texas Gov. Greg Abbott had a better idea.

“This is precisely why I called for a halt to refugees entering the U.S. from countries substantially controlled by terrorists,” the governor said in a statement released in response to Al Hardan’s arrest. “I once again urge the President to halt the resettlement of these refugees in the United States until there is an effective vetting process that will ensure refugees do not compromise the safety of Americans and Texans.”

“I commend the law enforcement for apprehending these two individuals, but their apprehensions raise the immediate question: Who else is there? What are they planning next?” Texas Sen. Ted Cruz said Friday in response to the arrests, CNN reported.

Trump’s right again. Gee, what a surprise. No matter how you look at it, you just can’t get around the fact that Trump didn’t become a multi-billionaire by being anything less than brilliant!! People had better start listen ro what Trump has to say. He has been right on all fronts. He did not become what he is by not knowing what is going on in the world . We have to put a halt on all Muslims coming in here until we can get a handle on what’s going on.This is their plan to take us over from within. Jimmy Carter put a halt on Iranian immigration with the Iranians for four years so we can do it again. Obama sure won’t do it that’s for sure they’re his people. Radical Islam is a way of thinking and is influencing lone wolf attacks. It keeps happening because Obama refuses to come to terms that we are under attack. Here are two comments that I agree with and sum it all up.

Islam is here to kill us plain and simple they hate our law the US Constitution. The Constitution is totally contrary to the Sharai Law, and Obama might as well stick us the middle finger on live television its same difference. The US is a divided nation, and until it gets undivided we won’t survive.

America will never be destroyed from the outside. If we falter and lose our freedoms, it will be because we destroyed ourselves.
Abraham Lincoln

Until civilized people grasp the fact Islam is a barbarian totalitarian ideology disguised as a theology by a barbarian warlord named Mohamed to coerce ignorant savages to accept his rule. Until this is looked at the way it should be this cancer will continue to spread until civilization is destroyed.