The current administration is positioning their policy initiatives as if they are intended to help the working class. Nothing could be further from the truth. It’s not about us.

Trial lawyers and gigantic unions make billions of dollars off of the backs of the working class and are the puppet-masters of the White House and congressional leadership. Too much is owed to these monstrous organizations – and they know it.

The leader of California’s giant United Health Care Workers West, Sal Rosselli, had the basic union strategy quoted from him as, “It’s between our vision of a bottom-up union movement and Andy Stern’s[SEIU’s president] idea that a few folks in Washington should control all the decisions.”. Andy and Sal want to make sure that they control those few people.

All of the unions have an interest in a government-run, tax payer funded health care system.  The current bill would relieve them of tremendous liabilities for their overly-generous benefits.  Although the bill considers that health care benefits be taxable for the common worker, unions would get a free pass.  The bill also opens the door to allow unionization of health care workers everywhere, and could end-up making it required.  Of course they are for the public option, but not because its better for anyone other than the union leadership.

The administration is putting protectionist tariffs in-place to protect the United Steel Workers union.  In retaliation, the affected trade partners are going to tax incoming auto parts and chickens.  Those affect smaller unions (and non-union workers) which make it a calculated, acceptable loss.  This short-sighted move is exactly what helped move the recession into a depression in the 1930’s.  Smoot-Hawley anyone?

Texas trial lawyers are just as influential.  Tort reform has been incredibly successful at increasing access to care in rural areas and cutting costs in both California and Texas.  The trial lawyers lobby is so powerful so that even though there is a proven tactic available, it will not be considered by the President or congressional leaders Pelosi and Reid.

Perhaps they can’t help themselves.   Maybe they just don’t care.  We have to. 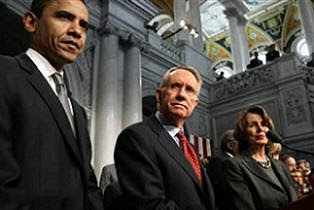 Should our health care, economic, or national security put in the hands of greedy union leaders and trial lawyers?  Who elected them?  The unions are controlling the current congress and white house by calling in IOU’s for having given them the presidency and a congressional majority.  We don’t owe the unions anything and I’m tired of paying for politicians having given their souls to these devils of industry.

Elon Musk Huddled With GOP Leaders And Donors. Here’s What He Told Them