The Latest News about The Moon 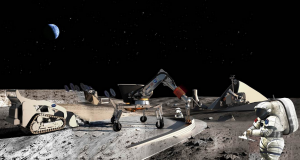 Sometimes the most consequential events are little understood—or even noticed—as they unfold. For instance, on July 14, 1789, the day that French revolutionaries stormed the Bastille, King Louis XVI wrote in his diary, “rien” (nothing). That’s how disconnected Louis was from the tide of history. And soon, of course, he was disconnected from his head. In our era, on April ...

END_OF_DOCUMENT_TOKEN_TO_BE_REPLACED

How the moon landings changed our view of the solar system

By Christopher Crockett July 17, 2019 Comments Off on How the moon landings changed our view of the solar system 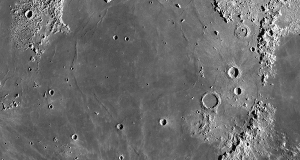 By Christopher Crockett, Knowable Magazine When Neil Armstrong took one small step from his spindly spacecraft onto the surface of the moon half a century ago, he began a story that would revise science’s knowledge of our origins. From 1969 to 1972, six Apollo missions hauled back 382 kilograms of rocks and soil. Those samples revealed much about our cosmic ...

END_OF_DOCUMENT_TOKEN_TO_BE_REPLACED 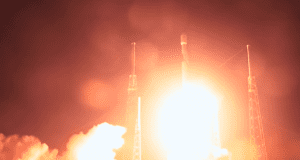 The Trump administration congratulated the Government of Israel and our respective commercial space industries for the historic SpaceX Falcon 9 rocket launch of SpaceIL’s Lunar Lander named Beresheet. The mission launched yesterday from Cape Canaveral Air Force Station, Florida, at 8:45 p.m. EST and will land on the Moon in about two months, according to a Fox News report. The ...

END_OF_DOCUMENT_TOKEN_TO_BE_REPLACED

NASA welcomed a new administrator, Jim Bridenstine, deputy administrator, Jim Morhard, and chief financial officer, Jeff DeWit, in 2018. Their focus is on firmly establishing the groundwork to send Americans back to the Moon sustainably, with plans to use the agency’s lunar experience to prepare to send astronauts to Mars. “Our agency’s accomplishments in 2018 are breathtaking. We’ve inspired the world and created ...

END_OF_DOCUMENT_TOKEN_TO_BE_REPLACED

NASA offers Tour of the Moon in 4K

Duncan Idaho April 10, 2018 Comments Off on NASA offers Tour of the Moon in 4K 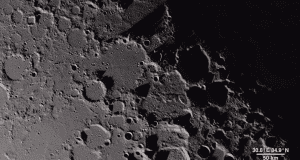 Take a virtual tour of the Moon in all-new 4K resolution, thanks to data provided by NASA’s Lunar Reconnaissance Orbiter spacecraft. As the visualization moves around the near side, far side, north and south poles, we highlight interesting features, sites, and information gathered on the lunar terrain. Music Provided By Killer Tracks: “Never Looking Back” – Frederick Wiedmann. “Flying over ...

END_OF_DOCUMENT_TOKEN_TO_BE_REPLACED

Watch: Trump Signs Directive to Return Men to the Moon, Mars and Beyond

R. Mitchell December 11, 2017 Comments Off on Watch: Trump Signs Directive to Return Men to the Moon, Mars and Beyond 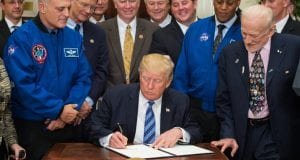 President Donald Trump will sign his first space policy directive, which is widely expected to include manned missions to the moon, in a ceremony Monday. The signing ceremony is to be held on the 45th anniversary of the last manned lunar mission, Apollo 17, in 1972. Trump signed an executive order in June creating the National Space Council (NSC). Vice ...

END_OF_DOCUMENT_TOKEN_TO_BE_REPLACED 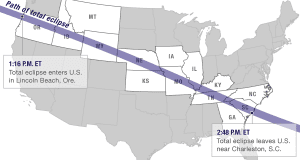 The United States Of America will witness an event of Biblical proportions on August 21, 2017. If this sounds a bit dramatic, consider these things: • In Genesis 1 we are told that one of the reasons God has given us the sun, moon, and stars is “for signs”. In Luke 21 we are told, “There will be earth-shattering events—the ...

END_OF_DOCUMENT_TOKEN_TO_BE_REPLACED

The First Man On the Moon, Neil Armstrong, Has Passed Away

Chris Enloe August 25, 2012 Comments Off on The First Man On the Moon, Neil Armstrong, Has Passed Away

Reports on Saturday afternoon report that the 82 year old, former astronaut has passed away. As commander of the Apollo 11 mission, Armstrong became the first human to set foot on the moon on July 20, 1969 Armstrong underwent a heart-bypass surgery earlier this month to relieve blocked coronary arteries. Rest in Peace Neil, and may God be with you.