The United States Of America will witness an event of Biblical proportions on August 21, 2017. If this sounds a bit dramatic, consider these things:

• In Genesis 1 we are told that one of the reasons God has given us the sun, moon, and stars is “for signs”. In Luke 21 we are told, “There will be earth-shattering events—the heavens themselves will seem to be shaken with signs in the sun, in the moon, and in the stars.”

• Monday, August 21, there will be a Solar Eclipse that will cross from coast to coast over America
• It has been nicknamed America’s Eclipse
• It has also been referred to as The Great American Solar Eclipse
• This is the first solar eclipse in 99 years to cross over the country from coast to coast
• This is the first solar eclipse to darken the U.S. mainland since 1979

• In Matthew 12 the Sadducees and Pharisees, while trying to bait Jesus, told Him to show them miraculous signs. Jesus told them that the only sign they would be given was the sign of the prophet Jonah. The most common interpretation and understanding of this passage of Scripture is that Jesus was speaking of His death and resurrection 3 days later, just as Jonah spent 3 days in the belly of the whale. While this fact is true, due to modern astronomical calculations, we now know that there was a total eclipse that passed near Nineveh on June 15, 763 BC. According to historians, this appears to be when Jonah went into Nineveh declaring that destruction was coming to that city in 40 days if they did not repent.

• “The first major city that will witness the eclipse is Oregon’s state capital, Salem. Salem is of course the shortened version of “Jerusalem”, which is the most prophetically significant city in the entire Bible. Jerusalem was originally called “Salem” in the days of Melchizedek (Genesis 14:18) who was a foreshadowing of Christ or possibly even a Christophany. If that isn’t interesting enough, the closest road to the exact point where the two eclipses cross is Salem Road in Makanda, Illinois. What are the chances of that?”

• There are four factors that make this eclipse the most-viewed ever:
1. media attention
2. traffic on the highways and by-ways of America
3. the typical weather across the nation on August 21, 2017
4. the vast number of people who will have access to it from nearby large cities.

Ezekiel 33:1-6 commands the watchmen to faithfully warn others of the danger that is coming to the land.

Is God warning America of impending disaster and destruction coming to our land?

This passage of Scripture most certainly seems to confirm that this is indeed the case:
“The sun will be turned to darkness…before the coming of the great and dreadful day of the Lord.” Joel 2:31

God tells us:
“… if My people, who are called by My name, will humble themselves and pray and seek My face and turn from their wicked ways, then I will hear from heaven, and I will forgive their sin and will heal their land.” 2 Chronicles 7:14

This is the very same warning that God gave the people of Nineveh through Jonah.
“When Jonah’s warning reached the king of Nineveh, he rose from his throne, took off his royal robes, covered himself with sackcloth and sat down in the dust. This is the proclamation he issued in Nineveh:

“By the decree of the king and his nobles:
Do not let people or animals, herds or flocks, taste anything; do not let them eat or drink. But let people and animals be covered with sackcloth. Let everyone call urgently on God. Let them give up their evil ways and their violence. Who knows? God may yet relent and with compassion turn from his fierce anger so that we will not perish.”

When God saw what they did and how they turned from their evil ways, He relented and did not bring on them the destruction He had threatened.” Jonah 3:6-10

Will America heed the warning just as the people of Nineveh did?

Sadly, it does not appear that way so far.
Rather than heeding the warning, Americans are responding with “excitement”, declaring:
• “The Great American Eclipse on August 21 is such an exciting event, it is a really singular and unique event in human history..”
• Deciding to celebrate one of nature’s most awe-inspiring sights…marking the monumental event in a special way…with a one-of-a-kind experience with which to take it all in.”
• Outlining “fun stuff to expect during totality…”
• “Encouraging the entire country to watch, enjoy, experience it and do it in a safe way…”
• “Celebrating the occasion in style…making the eclipse a travel-worthy affair… parties included…with as much rosé as you can pack in your cooler…”

Isaiah 5:20 sums it up in this way:
“O how terrible for those who confuse good with evil, right with wrong, light with dark, sweet with bitter.” (VOICE)
another translation declares, “What sorrow for those who say that evil is good and good is evil, that dark is light and light is dark, that bitter is sweet and sweet is bitter.” (NLT)

It’s being heralded as a “once-in-a-lifetime event“. From coast to coast, this nation will experience darkness all across the land. How terribly sorrowful for the confused people of this nation! It’s not too late, America! It’s not too late! “Let everyone call urgently on God. Let them give up their evil ways and their violence. Who knows? God may yet relent and with compassion turn from his fierce anger so that we will not perish.” Jonah 3:8-10 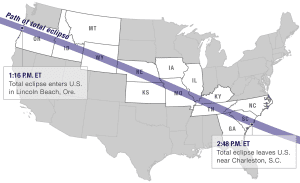 Support Conservative Daily News with a small donation via Paypal or credit card that will go towards supporting the news and commentary you've come to appreciate.
Tags
Bible Prophecy solar eclipse sun The Moon 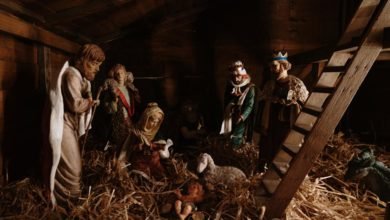 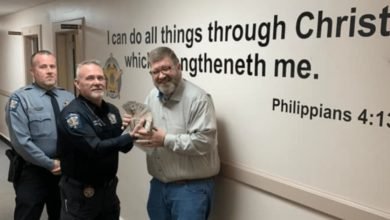 NC Sheriff being targeted over Bible verse by atheist group