Bradlee Dean is an ordained preacher, heavy metal drummer, talk-show host of the Sons of Liberty Radio, and speaks on college and high school campuses with his ministry, You Can Run But You Cannot Hide International. @BradleeDean1

Forefathers Face-off with Modern Politicians – 2nd Amendment is a God-Given RIGHT, Americans, not a Privilege

Bradlee Dean March 16, 2018 Comments Off on Forefathers Face-off with Modern Politicians – 2nd Amendment is a God-Given RIGHT, Americans, not a Privilege 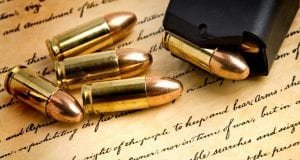 “The Constitution shall never be construed to prevent the people of the United States who are peaceable citizens from keeping their own arms.” – Samuel Adams, Massachusetts Ratifying Convention, 1788 With all of that is going on with these anti-gunner politicians (surrounded by armed security detail) working hard for their special interest groups, rather then upholding the US Constitution, the US ...

END_OF_DOCUMENT_TOKEN_TO_BE_REPLACED

“If you tell a lie big enough and keep repeating it, people will eventually come to believe it. The lie can be maintained only for such time as the State can shield the people from the political, economic and/or military consequences of the lie. It thus becomes vitally important for the State to use all of its powers to repress ...

END_OF_DOCUMENT_TOKEN_TO_BE_REPLACED

Freedom to Break the Law?

Bradlee Dean July 12, 2013 Comments Off on Freedom to Break the Law?

“The known propensity of a democracy is to licentiousness, which the … ignorant believe to be liberty.” – Fisher Ames, architect of the First Amendment In light of the George Zimmerman trial, many people are watching the media circus fabricate its next deception. While the media are attempting to divide America through racial wars that belong not to this generation, ...

END_OF_DOCUMENT_TOKEN_TO_BE_REPLACED

“Criminals mock society’s laws. Your compassion is a weakness that your enemies do not and will not share…”  – Bradlee Dean As the White House has been slammed with scandals such as Benghazi, Extortion 17, the AP phone tapping scandal, targeting FOX News, and the IRS targeting conservative groups, Obama appeared before the nation at a press conference. In the ...

END_OF_DOCUMENT_TOKEN_TO_BE_REPLACED

Terror: The Writing is on the Wall

“The system of terror was essential to Stalinism. … Terror was the creation to mold politically the control that they wanted.” – Condoleezza Rice, “Joseph Stalin: Red Terror” As we look back at the atrocities that have devastated America over the past 12 years since 9/11, one has to reflect upon history and see how it is that past dictators ...

END_OF_DOCUMENT_TOKEN_TO_BE_REPLACED

“We the People are the rightful masters of both Congress and the courts, not to overthrow the Constitution but the men who pervert the Constitution.” – Abraham Lincoln In response to being called out on the carpet for his tyrannical methods, Obama stated publicly, “I am not a dictator.” Whatever Obama says, you can rest assured he is doing the ...

END_OF_DOCUMENT_TOKEN_TO_BE_REPLACED

Divide and Conquer – The Two-Party System

“There is nothing which I dread so much as a division of the republic into two great parties, each arranged under its leader, and concerting measures in opposition to each other. This, in my humble apprehension, is to be dreaded as the greatest political evil under our Constitution.” – John Adams Here we go again … The so-called “right” has ...

END_OF_DOCUMENT_TOKEN_TO_BE_REPLACED

How to end tyranny!

“Posterity! You will never know how much it cost the present generation to preserve your freedom! I hope you will make good use of it. If you do not, I shall repent in Heaven that I ever took half the pains to preserve it.”  — John Adams There has been great concern about how Tyrant Barack Hussein Obama has been out ...

END_OF_DOCUMENT_TOKEN_TO_BE_REPLACED

Prevention Would Have Been Better Than Trials

“Politicians brought the Nazis to power and started the war. They are the ones who brought about these disgusting crimes.” – Karl Doenitz, German admiral and would-be fuehrer after Hitler On Nov. 20, 1945, the Nuremberg Trials began, bringing Hitler’s Nazi criminals to justice. By this time, several countries were destroyed, and 50 million people, 2.5 percent of the world’s ...

END_OF_DOCUMENT_TOKEN_TO_BE_REPLACED

School Shooters and the Pharmaceuticals

Bradlee Dean January 21, 2013 Comments Off on School Shooters and the Pharmaceuticals

“ADHD is fraud intended to justify starting children on a life of drug addiction.” – Dr. Edward C. Hamlyn, founding member, Royal College of General Practitioners One of the most celebrated battle rifle manufacturers, John Noveske, mysteriously died in a car crash in southern Oregon days after posting on Facebook about the link between psychotropic drugs and shootings.   John ...

END_OF_DOCUMENT_TOKEN_TO_BE_REPLACED

After receiving news of these treacherous violations, I thought it appropriate to ask the American people, where are they deriving their powers?