A Minnesota high school is hosting a pro-Palestine film screening on Saturday, according to a Facebook post.

American Muslims for Palestine, an organization devoted to educating about how the people of Palestine have been “living under occupation for decades,” is screening the pro-Palestine Netflix film, “Farha,” at Fridley High School, according to a Facebook Post. “Farha,” tells the story of a “Palestinian girl in 1948 who watches the Nakba overtake her home as she hides in a locked pantry.”

Nakba, which means catastrophe, concerns the “ethnic cleansing of Palestine in 1948” when the Zionist military forced out at least 750,000 Palestinians and captured most of Palestine, according to Aljazeera.

Israelis criticized the movie because during the 1948-49 War of Independence, it depicts Zionist military brutality towards Palestinians, according to the Israel Hayom. Israeli officials claimed the director of the film was “creating a false narrative” because the film depicts Israeli soldiers killing a Palestinian family and baby.

Following the release of the film in 2021, hundreds of Israelis protested outside of Netflix’s headquarters in London alleging that the movie “put Jews, Israelis, and Israeli soldiers” in danger, the Israel Hayom reported. “Farha” failed to make the final nomination list for an Academy Award in 2023.

The Minnesota Anti-War Committee, a “women- and queer-led” group focused on protesting “the injustices of U.S. foreign policy” in Palestine, endorsed the “movie night” at the school, the organization website showed. American Muslims of Palestine, the organizer of the event, is “the leading organization providing anti-Zionist training and education to students,” according to the Anti-Defamation League.

“The mission of the American Muslims for Palestine is to educate the public about the just cause of Palestine and Palestinian rights and advocate for self-determination, justice and liberation,” the American Muslims of Palestine website stated. “Through providing information, training, and networking with like-minded individuals and organizations that support justice, AMP raises awareness on the issues pertaining to Palestine and its rich cultural heritage and advocates for justice and liberation for the Palestinian people.”

American Muslims for Palestine, the Minnesota Anti-War Committee and Fridley High School did not immediately respond to the Daily Caller News Foundation’s request for comment.

Support Conservative Daily News with a small donation via Paypal or credit card that will go towards supporting the news and commentary you've come to appreciate.
Reagan ReeseJanuary 5, 2023
1
Facebook Twitter Reddit Telegram Share via Email Print 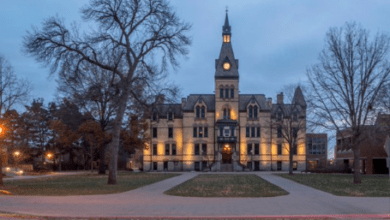