When huge swaths of the country were forced to shut down in response to COVID-19, Americans realized the power politicians and bureaucrats can wield to reshape society. Sadly, today there are many in government who have no interest in relinquishing that type of command and control over the lives of the American people.

In fact, under President Joe Biden and one-party Democrat rule in Washington, Americans are increasingly under threat of seeing their way of life buried by a looming avalanche of new policies and regulations, driven by an explosion in new spending, taxes and debt.

Thanks to policies enacted since Biden took the Oath of Office, the federal government will spend $10 trillion more over the next decade than was projected before Biden took office.

That’s more than was spent in the first 196 years of American history. $2.5 trillion of that new spending will just be for higher interest payments on our debt as fallout from the president’s inflation crisis.

When Biden became president, instead of returning control to the American people, Democrats began spending furiously on their personal political agenda. It began with their $2 trillion so-called “American Rescue Plan” which sparked the worst inflation crisis in 40 years.

That plan spent $400 billion to pay people not to work, inflaming the labor shortage by making a government check more lucrative than a job. It also left behind a massive trail of waste and abuse – including $783 million in stimulus checks to prisoners, $400 million for state parks and trails in Michigan and even $140 million for a luxury hotel in Florida.

In return, Americans paid an extra $3,500 inflation tax last year and will be spending another $5,900 this year just to afford basic goods and services.

Yet the spending didn’t stop there. Soon after, Congress adopted and the president signed a $625 billion infrastructure bill. Despite claims that the bill was fully paid for, analysis from the Congressional Budget Office showed less than 30% of the legislation’s spending was offset.

With prices on everything from gas to groceries skyrocketing, Democrats once again put their political priorities ahead of the people’s concerns. First they introduced the largest spending bill in U.S. history, the $5 trillion Build Back Better bill. When that effort stalled, Democrats followed up with the $745 billion so-called “Inflation Reduction Act” – a law that economists argue will do nothing to combat inflation and will in fact make it worse.

That law is a massive down payment on a far-left agenda to coax, bribe, or fine Americans into adopting the lifestyle of wealthy environmentalists. It is welfare for the wealthy and big corporations that hands out $7,500 subsidies for families earning upwards of $300,000 to purchase luxury electric vehicles (EVs) and another $4,000 to boost the resale price of their old EVs, alongside $362 million for corporate America to make their headquarters “greener.”

Low and middle-income taxpayers will be picking up the tab with higher taxes – including $10 billion in new taxes on families earning less than $200,000 – and a higher cost of living.

The most telling example of how Democrats want to expand Washington’s power was the $80 billion they earmarked for the IRS in their latest bill. An agency with a troubling track record of unfairly targeting Americans can now hire 87,000 new agents and perform one million more audits annually on people earning less than $200,000.

Where Congress has failed to fully spend the desired amount Biden wants, he simply has gone around them through issuing new executive actions. He has been singlehandedly rewriting the federal government’s role in American life through his executive actions which have expanded Obamacare, eliminated work requirements for able-bodied adults receiving government benefits, and most recently his decision to have taxpayers foot the bill for canceling over $330 billion of student loan debt for wealthy families earning as much as $250,000.

All told, Biden’s personal spending spree — outside of Congress — is now over $1 trillion.

Lurking behind all of this reckless government spending is a desire to impose the will and vision of politicians and bureaucrats on society writ large — including telling Americans what health plans they should buy and what cars we can drive.

All the while reassuring us that just a little more spending will make everything okay.

Jason Smith is the representative for Missouri’s 8th Congressional District. He also is the Republican leader of the Budget Committee and the Ways and Means Committee. 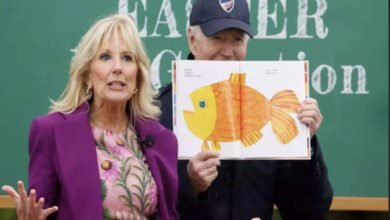