The Biden administration reportedly pressured Twitter to remove the account of Alex Berenson, a former New York Times reporter and prominent critic of Biden’s COVID-19 policies, according to documents obtained and published by Berenson.

Twitter suspended Berenson’s account Aug. 28, 2021 for a tweet they later acknowledged didn’t violate their rules, then reinstated him in July as part of a settlement in Berenson’s lawsuit against the company, according to the documents. The White House had pressured Twitter to remove him from the platform four months before his suspension, even though the company concluded he had followed Twitter’s rules.

Berenson is a prominent public critic of Biden’s COVID-19 response and has questioned the safety and efficacy of COVID-19 vaccines.

“They had one really tough question about why Alex Berenson hasn’t been kicked off the platform; otherwise their questions were pointed but fair – and mercifully we had answers,” a Twitter employee wrote in a private company slack channel April 22, 2021 when asked “How was WH?” according to screenshots shared by Berenson. The documents were obtained in the discovery process of Berenson’s lawsuit, he wrote. “I believe these documents show that the Biden administration violated my First Amendment rights in pressuring Twitter to ban me, and I look forward to suing the administration in federal court,” Berenson told the Daily Caller News Foundation. 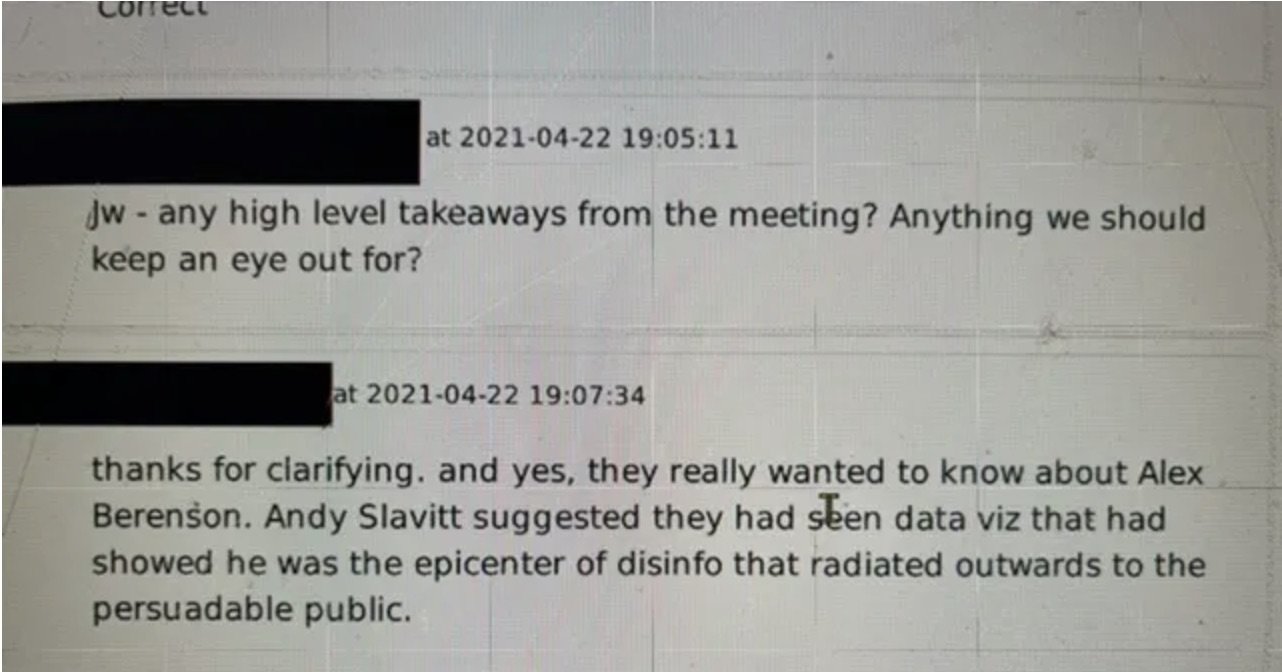 A Twitter employee said in one message that Andy Slavitt, senior advisor to President Biden’s COVID-19 response team, suggested Berenson was the “epicenter of disinfo that radiated outwards to the persuadable public,” according to a screenshot Berenson shared.

Top federal officials specifically targeted Berenson and pressured a private company to deplatform him, the documents reveal, potentially violating his First Amendment rights, he wrote. While previous lawsuits related to social media companies and governments working together to ban users have failed, he believes the targeting makes his case different.

Twitter and the White House did not respond to the Daily Caller News Foundation’s requests for comment.

Content created by The Daily Caller News Foundation is available without charge to any eligible news publisher that can provide a large audience. For licensing opportunities of our original content, please contact [email protected]org