I want to stipulate first that no government is in a position to dictate to its people whether someone’s statements are truthful or not. It is up to each individual to determine the validity of what they hear or read and ascertain its authenticity. Our First Amendment right to Free Speech prevents explicitly such action. But, don’t let a little thing like the United States Constitution stand in the way of Joe Biden and this out-of-control, incompetent administration. This government is so paranoid of the power of free speech that they have chosen to take action that I hope will be challenged and shut down by the Supreme Court.

DHS Secretary Mayorkas disclosed this week, during his testimony before Congress, that a “Disinformation Governance Board” had recently been created to combat online disinformation. Politico reported that Nina Jankowicz, who previously served as a disinformation fellow at the Wilson Center, will head the board as executive director. Jankowicz knows a lot about truth as she has been professing the Hunter Biden Laptop was a product of the Russians and the Trump campaign.

The timing of this announcement comes on the news of Elon Musk successfully buying Twitter. They are paranoid that Elon Musk will expose them as the people who have censored content on Social Media for the last five years. Elon Musk bought Twitter to return it to its original state as a platform for “Absolute” Free Speech. Free Speech without moderation, IE censorship, will expose and destroy the Biden Administration.

Interestingly, this board was created within the Department of Homeland Security. DHS Secretary Mayorkas has lied to us for fourteen months that our border is secure. Now he will be in charge of a board that’s purpose is to cleanse information, so we are only exposed to the truth.

“Rather than police our border, Homeland Security has decided to make policing Americans’ speech its top priority,” Republican Sen. Josh Hawley tweeted. “They’re creating a Disinformation Board. No, really. And take a look at the views of the leftist radical running it.”

There has been no information about how this board will operate and how they will control the content. Still, their target is the dissemination of information via the Internet. It is obvious the only content they will be watching will be Twitter. Apparently, the administration feels they have adequate control over the mainstream media.

This administration that has taken us down a perilous road with their poor decisions will now protect us from free speech. This administration has lied to us about Afghanistan, transitory inflation, Putin’s gas hikes, the border situation, Joe’s business dealings with Hunter, and even Joe’s mental fitness. They now want us to trust them to discern truth from lies for us. I don’t think so, Joe, but thanks. We are all set and will watch and listen for ourselves.

I hope their fear is justified. I hope Elon Musk lives up to his word, destroys the Twitter algorithms, and lets the light shine on these people who have been manipulating the truth for years. I hope Joe’s paranoia is justified, and the power of free speech is what brings down the Joe Biden House of Lies.

Agree/Disagree with the author(s)? Let them know in the comments below and be heard by 10’s of thousands of CDN readers! 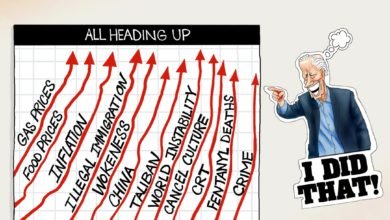