Quintez Brown is a Black Lives Matter activist whose saga is illustrative of who has privilege in America and on what grounds it is bestowed.

The Louisville Courier-Journal made him an op-ed columnist on the important race and social justice beat. He also served as the opinion editor for the University of Louisville’s student paper. There, he is, of course, a member of the MLK Scholars program, which includes full in-state tuition plus an $8,000 stipend to cover other university expenses.

In 2019, Brown met with former President Barack Obama and was named a “rising face” by his nonprofit, My Brother’s Keeper Alliance. His peers praised him as “an active voice in the Louisville community for justice, equality and freedom,” one who had demonstrated daily in 2020 over his frustrations with how black people have been policed across America. This soldier in the army of progress even announced a run for Metro Council in District 5 recently.

But on Monday, Feb. 14, Louisville Metro Police announced Brown had been arrested and charged with attempted murder.

The “rising face” allegedly tried that morning to shoot Craig Greenberg, who is running for Louisville mayor. Greenberg was sitting in his office at the red brick Butchertown Market building when Brown fired several times with a handgun. According to Greenberg, staff members were gathered for a meeting when Brown entered, “pulled out a gun, aimed directly at me and began shooting.” One person managed to shut the door as the others barricaded it with tables and desks. Brown grazed Greenberg’s clothing, but, miraculously, no one was hurt.

The case of Quintez Brown is what happens when society takes grievances for signs of merit and aptitude. You could say this is a “systemic” problem today: the harder one leans into identification with a supposedly oppressed minority group, the likelier wreaths of laurels and praise befall them from our overlords.

Brown’s life is a portrait of privilege, the kind he and his handlers claim is a special reserve for whites in America. 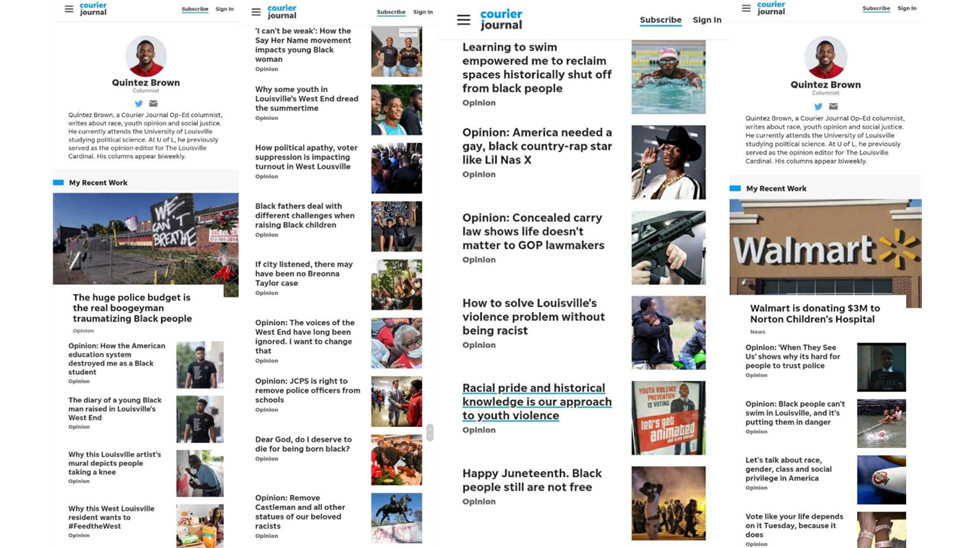 The Louisville shooter pleaded not guilty to the attempted murder charge and four counts of wanton endangerment. According to the Courier-Journal, a night-duty judge initially set Brown’s bail at $75,000. But at the behest of the county attorney’s office, Jefferson District Judge Annette Karem increased it to just $100,000 and ordered Brown be placed on home arrest if released. The number struck people as awfully low for attempted homicide, especially with the Waukesha massacre only a few months ago.

On Nov. 21, a BLM supporter and black nationalist named Darrell Brooks allegedly drove his vehicle into a Christmas parade, killing six people and wounding more than 60 while out on bail. Prosecutors charged him with six counts of intentional homicide. Milwaukee District Attorney John Chisholm later admitted that it had been set “inappropriately low.” Brooks and Brown have that and more in common.

Brown’s attorney, Rob Eggert, told the Courier-Journal that while he doesn’t know Brown’s diagnosis, he is “severely mentally ill and needs treatment, not prison.” Eggert added that he had heard Brown is a “good kid” and noted his educational and professional accolades—as if a GPA should weigh on the prosecution’s mind.

Two days after the shooting, journalist Rachel Droze reported that BLM Louisville was strolling over to the bank for a cashier’s check. They intended to post Brown’s bail. Droze tweeted a video later that afternoon of a woman sporting a “Free Angela Davis” shirt handing over the $100,000 check to the clerk’s office. The Louisville Community Bail Fund paid for Brown’s release.

The fund’s website states that it is a fiscally sponsored project of the Alliance for Global Justice. As it turns out, the “alliance” receives financial support from George Soros’ Open Societies Foundation and “has been criticized for close alignment with authoritarian or semi-authoritarian left-wing regimes,” according to Influence Watch. Nevertheless, the Courier-Journal and most other outlets claim the fund is a humble little grassroots project.

Brown left jail just hours after his freedom was financed by the shady nonprofit. He is now resting cozily under the Home Incarceration Program, inconvenienced only by a GPS monitoring device and home checks. “Our criminal justice system is clearly broken. It is nearly impossible to believe that someone can attempt murder on Monday and walk out of jail on Wednesday,” Greenberg said in a statement.

Greenberg commented on the alleged mental issues of his would-be assassin, not realizing that the “mental health” trope is how criminals belonging to designated victim groups evade or mitigate punishment and are portrayed sympathetically by their media allies. Indeed, the Courier-Journal has padded every article about the shooting with the note that Brown went “missing” for 12 days last summer. After he was found, his family asked for privacy while his “physical, mental and spiritual needs” were addressed.

Chanelle Helm, a co-founder of the Louisville Community Bail Fund, told reporters that local BLM activists felt “shaken up” by the accusations against Brown and are “concerned for his mental health.” They are, above all, concerned with their image rather than public safety.

The Courier-Journal also reported that BLM has complained “jumping to conclusions about a motive for the shooting is ‘irresponsible’ and ‘disgusting.’” But the same people already insist Brown attempted to murder a man due to mental or socioeconomic issues. According to Droze, Helm “said activists and organizers like Brown likely have PTSD after the past couple of years of social unrest and the coronavirus pandemic.”

Recall that prosecutor Frederick Franklin recently railroaded combat veteran Jake Gardner, a white man, after he killed a black BLM supporter in self-defense amid the 2020 riots. Gardner had sustained injuries during his overseas deployments and struggled with PTSD.

But Franklin used Gardner’s military background to argue he was a cold-blooded killer who staged an “ambush” when BLM rioters vandalized his bar in Nebraska. Gardner killed himself after losing faith in the justice system that has thus far treated Brown with kid gloves.

What is it about the MLK Scholar’s views that BLM doesn’t want people examining more closely? Like MLK himself, Brown has plenty of dirty laundry.

Brown’s Twitter bio reads: “We have one scientific and correct solution, Pan-Africanism: the total liberation and unification of Africa under scientific socialism.” According to the Beast:
He even appeared to urge followers last week to join the Lion of Judah Armed Forces, a gun-toting group whose leadership has voiced ideas similar to those of the Black Hebrew Israelite movement.

The latter anti-Semitic ideology holds that black Americans, not Jewish people, are the true descendants of the Biblical Hebrews. Adherents of the BHI movement were charged with murdering four Jewish people at a kosher supermarket in Jersey City in 2019.

Like Brown, the alleged Waukesha killer is also very fond of the Hebrew Israelites and many of the same black power and black nationalist ideas and figures. If there is a case to be made about mental health here, it is that the ideology of BLM contributes to madness.

At any rate, the difference between the two is that the media did not give Brooks a microphone to argue for defunding the police.

He also wrote an op-ed  for the Courier-Journal condemning legislation that allowed carrying concealed weapons without a permit in Kentucky. There would have been fewer guns in Kentucky between himself and his victims if Brown had gotten his way.

So, a BLM activist who has written extensively about institutional racism allegedly tried to murder someone, had his bail subsidized by a billionaire-backed nonprofit and was allowed to walk out of jail in time for dinner two days later. And now, he is being showered with glowing and empathetic media coverage, portraying him as a promising but troubled freedom fighter who merely hit a little snag on the right side of history.

Support Conservative Daily News with a small donation via Paypal or credit card that will go towards supporting the news and commentary you've come to appreciate.
Pedro GonzalezMarch 2, 2022
Facebook Twitter Reddit Telegram Share via Email Print