Arguably the USPS played a pivotal role in the 2020 elections. FiveThirtyEight puts it this way: “We may have seen it coming, but now we know for sure: The coronavirus pandemic made the 2020 election look different from any other election in recent memory. Due to the massive expansion of mail voting, a staggering number of Americans cast their ballots before Election Day. And due to then-President Donald Trump’s false claims that mail voting would lead to election fraud, a huge partisan gap emerged between ballots cast by mail and ballots cast on Election Day.“

While the New Your Times claims to fact check mail-in voting false hoods. With such truth over facts scenario, and both sides digging their heels waiting for history to pass judgment on the 2020 elections, we take a simple system’s view:  We look at the inputs, then the outputs and we guess at plausible transfer function – that is, a best guesstimate as to what really happened. 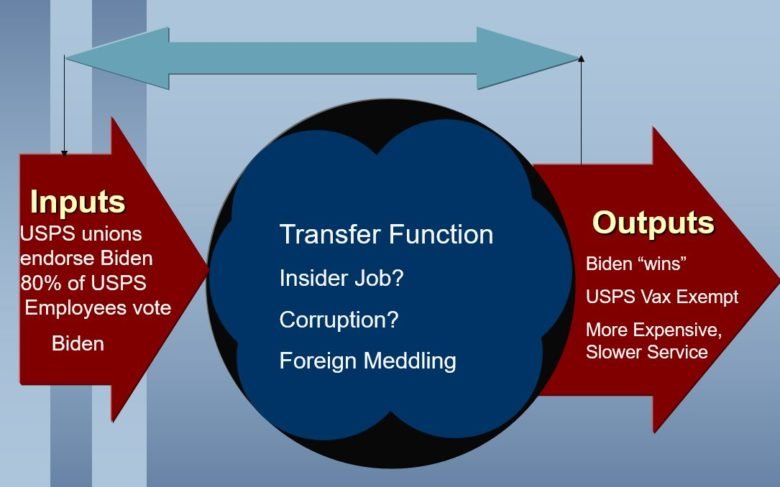 We also know that some 60-90% of security breaches happen due to Inside Jobs,  The wide range is not an anomaly – a great number of victim organizations are reluctant to admit to any security breach for obvious reasons.  We also know that insiders with motive, have a MOM:  Motive, Opportunity and Means – enough to easily commit any crime, such as voter fraud. We know for example that the USPS unions endorsed Joe Biden and that over 80% of the USPS workers voted for Biden. We can reasonably guess that most, if not all of the swing precinct employees, working with the USPS workers, voted for Biden

We know that as part of the inputs, President Trump was ahead in all vote counts, then voting stopped.  Our own Enthusiasm Gap which we published in Twitter, showed that President Trump had not only closed the gap, but surpassed it do that we declared him the winner. A few hours later something happened: A step function occurred on Joe Biden’s favor and he was declared the winner. What happened? On the output side, we know Biden was declared the winner and the USPS got rewarded with a vaccine mandate exemption, a price increase, slower service and a worse customer service than the DMV

In weasel-speak, The USPS describes its new pricing structure as: The price changes will raise overall Market Dominant product and service prices by approximately 6.9 percent. First-Class Mail prices will increase by 6.8 percent to offset declining revenue due to First-Class Mail volume declines. The USPS also says that dominant products go up by about 7%, and says that the USPS says it has more flexibility pricing competitive products . TRANSLATION:  Price increase mostly affects small businesses & Middle Class AND is actually much higher since the service  goes from #SnailMail standard to #SlothMail

Just last week at the #CamasWA USPO a lady shocked at new USPS prices refused the service and simply walked out shaking her head. At the same time, a USPS clerk yelled at customer for inserting the customer’s credit card too early – the computer was too slow so the clerk took it out on the customer. Not shocking. We estimate that if everybody had to register with the USPS like we have for the Department of Motor Vehicles, both would come on top as worse government customer service

It turns out that as President Trump often said, the new USPS prices help Amazon since Amazon wants to be a new kind of U.S. Postal Service where everything can get everywhere, but also quickly,” said e-commerce consultant Chris McCabe

If you closely follow the inputs and check out the outputs, as well as the media and big tech synchrony that we have seen before, clearly the 2020 election was impacted by an Inside Job! 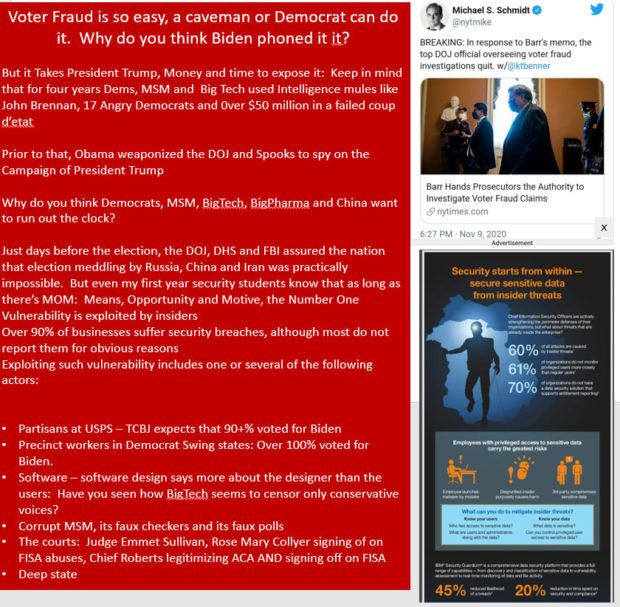 Is US Postal Service in Ranch Santa Margarita Worth saving?  Is a rhetorical question posed  By Elisabeth Meinecke Townhall Magazine Managing Editor.
My  visceral  reaction was a resounding, “Heck No ” when I read the headline, as it evoked a flurry of emotions from my visit  to the Rancho Santa Margarita’s post office yesterday, at around 2:30 pm

Support Conservative Daily News with a small donation via Paypal or credit card that will go towards supporting the news and commentary you've come to appreciate.
Tags
2020 Election News USPS voter fraud