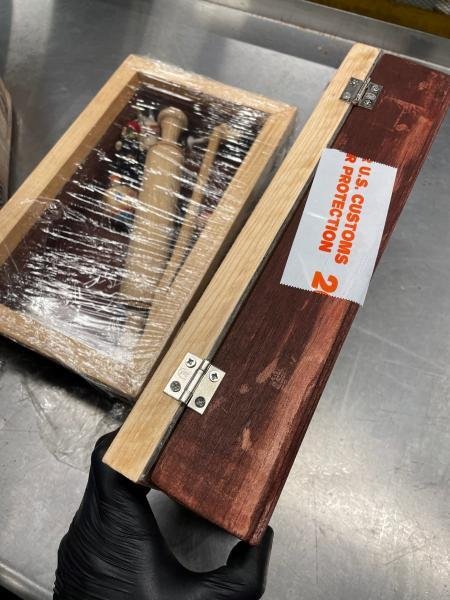 MEMPHIS – On Tuesday, August 24, U.S. Customs and Border Protection (CBP) Officers at an express consignment hub in Memphis, Tennessee examined a package described in the paperwork by the shipper as “wood crafts art and technique of making.” The shipment was sent from Michoacan, Mexico, to a residence in southeast Houston.

The shipment consisted of unvarnished wooden boxes with hinged lids, inside of which were wooden crafts, such as a little rolling pin. An x-ray yielded anomalies within two of the boxes. An intrusive inspection along the inside linings of the display boxes themselves yielded an off-white powdery substance. The substance was within gaps created by a double walling of the interior of the boxes. A CBP K9 was nearby and gave a positive indication the shipment contained the presence of narcotics. A field test tentatively displayed the properties of Fentanyl and the onsite CBP lab confirmed. Fentanyl is a Schedule II controlled substance that is similar to morphine but about 100 times more potent. The total weight was 2.85 kilograms. According to the DEA, “Drug trafficking organizations typically distribute Fentanyl by the kilogram. One kilogram of Fentanyl has the potentiald to kill 500,000 people.”

“This might seem like a small seizure from a little handicraft gift box,” said Acting Area Port Director Benjamin Canfield, “but if we look at those DEA numbers, this had the potential to overdose or kill 1.425 million people. That’s a lot of poison to be shipped to a residence in southeast Houston. I’m proud of my officers and the work they do every shift to stop these substances from reaching the wrong hands.”

This seizure took place within the Area Port of Memphis, which covers ports of entry throughout the state of Tennessee and falls under CBP’s New Orleans Field Office. This Field Office includes all ports in Louisiana, Mississippi, Alabama, Arkansas, and Tennessee.

Support Conservative Daily News with a small donation via Paypal or credit card that will go towards supporting the news and commentary you've come to appreciate.
Tags
border crisis Fentanyl narcotics

The Media Is Increasingly Using One Phrase To Describe Trump Allies