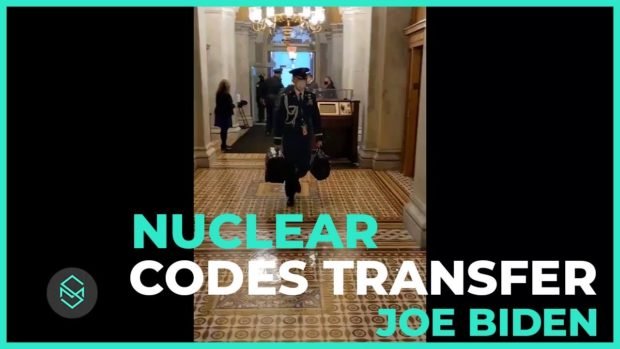 Three dozen Democrat Representatives, not Republican Reps, have sent a letter asking for Joe Biden, The Commander in Chief, to relinquish the sole access to the Nuclear Codes. They do not want the football in the hands of Biden alone without someone watching over him. These members of Congress, who despised former President Trump, took no such action while he was in control of the Codes so why now, what do these people know about Joe Biden that we do not know but they are concerned enough to want to usurp his power and control of our nuclear response. Obviously, in less than two months, the actions and demeanor of President Biden has made them nervous and concerned enough to step up and take action against the Leader of the Free World and the Democrat Party.

“Vesting one person with this authority entails real risks,” the letter from Rep. Jimmy Panetta, D-Calif., and obtained by Politico reads. “Past presidents have threatened to attack other countries with nuclear weapons or exhibited behavior that caused other officials to express concern about the president’s judgment.”

The letter continues: “While any president would presumably consult with advisors before ordering a nuclear attack, there is no requirement to do so. The military is obligated to carry out the order if they assess it is legal under the laws of war. Under the current posture of U.S. nuclear forces, that attack would happen in minutes.”

There are many reasons for the President being in sole control such as he is the ultimate commander of our military but is also about speed and security. Should we ever be under attack from a foreign power, time to respond is of the essence and there may not be the time to bring together a group of people to make a decision to respond. Thus the reason why the “nuclear football” is never far from the President.

The letter and tweets written by these same representatives indicates that there is a lack of confidence in the President. His limited schedule, his continued gaffes, his reluctance to be in front of the press to answer questions, the fact that Vice President Harris has been handling calls with foreign leaders that should be made by the President all lead to support the fear that Biden is not capable of handling the job. He is in effect not the acting President of the United States. This is something many of us feared since he became the Democrat nominee but now it is his own that is coming out to clip his power. Maybe this time we should listen to these folks, keep a close watch on this man, and be ready to do what is needed should he show he needs to be removed from office. It is a very scary thought but President Harris may happen to us sooner than we could have imagined. Dear God, protect us.