The Trump campaign has explicitly disavowed the MAGA Patriot Party in an effort to distance former President Donald Trump from the rogue conservative group, according to an FEC filing on Jan. 25.

In the Patriot Party’s original filing with the FEC, they claim to have entered a joint fundraising agreement with the Trump Campaign, prompting Donald J. Trump for President, Inc.

The filing caused the Trump campaign to release a notice disavowing the Patriot Party: 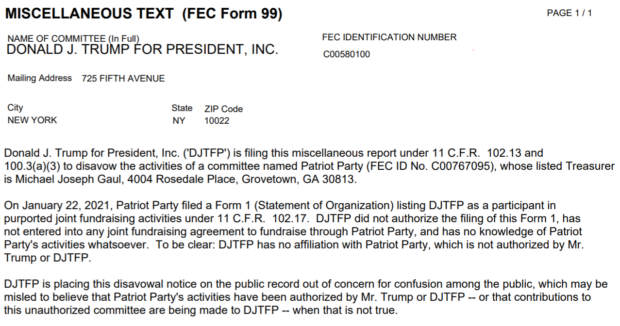 Trump has weighed starting a party of his own in the past, even considering the name “Patriot Party” to put pressure on congressional Republicans, anonymous sources told the Washington Post.

In last 24 hours, after floating through a few folks that he was considering creating a third-party as a way to keep Senate Rs in line ahead of impeachment, Trump has been talked out of that and is making clear to people he isn’t pursuing it, per ppl familiar w his thinking.

Trump “has made clear his goal is to win back the House and Senate for Republicans in 2022. There’s nothing that’s actively being planned regarding an effort outside of that,” senior campaign advisor Jason Miller told CNN.