Elected officials in New Jersey continue to wage war against energy companies, all in the name of solving climate change. The irony is that not only will this not accomplish their stated goal, but it will also come at the expense of good jobs and the local economy.

In early September, Hoboken Mayor Ravi Bhalla filed a lawsuit against several energy companies for what he claims is a decades-long campaign of misinformation related to climate change and its impact on global warming. Just one of a series of similar lawsuits filed across the country, these cases are often fronted by trial lawyers looking for a big payday or by out of touch environmental organizations — in this case the DC-based Institute on Governance and Sustainable Development — who are looking to advance their extreme political agenda.

The lawsuit alleges violations of New Jersey’s Consumer Fraud Act, as well as makes claims for negligence and common law remedies to prevent and abate hazards to public health, safety, welfare and the environment. The precedent has shown that these types of lawsuits stand on legally dubious grounds.

States and municipalities across the country from New York to California have tried to hold energy companies liable for the effects of climate change through public nuisance lawsuits. Several of the cases have been dismissed. Furthermore, the Supreme Court, which previously ruled that climate change is not a tort litigation issue, just last month granted review over jurisdiction on a similar case filed by the City of Baltimore. And while Mayor Bhalla’s lawsuit adopts a slightly different tack by prosecuting energy companies for violations of the Consumer Fraud Act, the complaints themselves cover no new territory in their objective to achieve climate action solutions.

Lawsuits such as this also threaten to undermine industries that are important to the economies of both New Jersey as well as the United States as a whole. As of 2015 the oil and gas industry supported over 142,000 jobs in the Garden State, provided more than $10 billion in wages and contributed more than $21 billion to the state’s economy. Across America meanwhile, the oil and gas industry support 11 million high-paying jobs, representing nearly 6% of total U.S. employment. Bankrupting such economic drivers and providers of high paying jobs is not the way to help the United States climb out of the economic hole created by COVID-19.

If successful, these lawsuits will also hobble a partner that has helped the United States make significant strides in mitigating emissions and has provided support to communities through the coronavirus pandemic.

What many environmentalists fail to admit is that fossil fuels are essential to both the building and operation of renewable energy infrastructure and the provision of baseload, “always on” power that supports wind and solar sources. Since 2000, the energy industry has also spent billions on CO2 mitigation and due to a migration away from dirtier fuel sources and towards natural gas power generation, carbon emissions in the U.S. dropped 28% from 2005–2017.

Furthermore, many New Jersians are probably not aware that petrochemical feedstocks have been essential in the fight against COVID-19 by providing front line medical workers with the protective gear they need. Ethane and propane for example, two distillates of natural gas, are among the most commonly used to produce gowns, face shields and N-95 masks. Kneecapping the suppliers of these key raw materials will only exacerbate the fight against this virus.

Yet despite these facts, political pressure is growing in New Jersey to move forward with more of these lawsuits. While New Jersey’s statewide officials have stayed silent on the matter thus far, in Trenton a group of lawmakers is considering a resolution to urge the Attorney General and Governor to pursue climate litigation similar to that of Hoboken. The Governor and AG should hold firm and not fold to these pressure campaigns orchestrated by out of state activist groups. The cost of doing so would be too high for New Jersey.

Support Conservative Daily News with a small donation via Paypal or credit card that will go towards supporting the news and commentary you've come to appreciate.
Tags
Climate environment war on energy 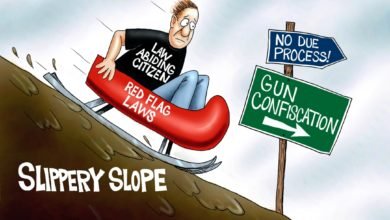