The crackdown on the China Flu is an eye-opener in a number of ways. In Rhode Island, the governor has police roadblocks on major highways stopping any cars with New York plates. She has also mobilized the National Guard and troops are conducting house–to–house searches for New Yorkers as other troops man outposts in airports, train stations, and bus stops. 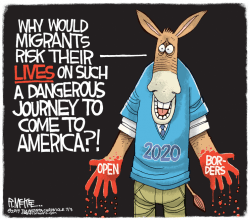 Texas is confronting air passengers from New York, New Jersey, Connecticut and Louisiana ordering them into quarantine. Highways are also roadblocked to snare drivers from Louisiana.

Florida also has highway checkpoints and airport intercepts. In a new wrinkle, the governor has suspended property rentals and some mayors are imposing curfews.

California is using cell phone data to track the movement of citizens. The mayor of Los Angeles has threatened to cut off water and power to businesses that don’t comply with close orders. He’s also organizing citizen vigilance groups to inform on neighbors.

Even Honolulu, Hawaii, which has little to fear from even Louisiana drivers, is ordering roadblocks to catch violators of quarantine orders.

The goal of these extreme measures is to respond to an alien virus that threatens to kill thousands of Americans. It’s a crisis and the Flustapo measures are only temporary and justified because this extraordinary event threatens lives, imposes punishing wage losses and will change the culture.

What I’ve learned from this is that the government has been lying to law-abiding citizens for decades. We’ve had the way to reverse a plague of illegal aliens all along. What we’ve lacked is the will from weak and collaborationist politicians.

How can I compare a virus to a massive violation of the law? Easy. Look at the similarities.

The China Flu is supposed to kill up to 200,000 (the estimate depends on where that day’s dart lands). Okay let’s compare deaths.

National Review found in just 2009 illegals in TX, NY, FL, CA and AZ were responsible for 5,400 murders in a single year. The GAO calculates between the years 2003 and 2009 illegals committed 25,064 murders nationwide. Since the illegal population increases each year the yearly total will no doubt increase, too.

Those are just intentional deaths. There’s collateral damage from Latin America’s national pastime, driving while drunk. Yearly estimates there range from a low of 3,000 by Americans for Legal Immigration, to a midpoint of 4,745 by Cong. Steve King — widely known as a racist because he calculated the numbers. And a high of 8,527 by the AAA Foundation for Traffic Study that no doubt includes sober illegals who just didn’t have a license or were hit by drunk citizens.

Let’s take King’s estimate. Roughly 232,505 people were killed in car crashes with drunk illegals between 2003 and 2009. Add in the homicides it’s a rough estimate of 257,569 deaths over seven years which puts us in Kung Flu territory, only slower.

(Getting a precise count of nationwide deaths caused by illegals is almost impossible because the government intentionally hides or doesn’t gather the data in the first place.)

Next is economic damage. Breitbart ran the numbers from an analysis by the National Academies of Science and found the avalanche of foreigners into the job market cost American’s $650 billion a year in lower wages due to a flooded labor market. Multiply by seven and you’re in federal bailout territory.

And as for the culture change, well press 1 for English.

Now your objection is the public won’t stand for a crackdown of Wufluenza intensity on those nice people who confuse our order in the drive–thru.

A recent Harvard/Harris poll found that only 2 out of every 15 Americans are even aware of the tidal wave of illegals, to say nothing of the death toll.

If the media gave the same level and intensity of coverage to the illegal death toll that it does to the projected China Flu death toll borders would become important again. Instead of treating illegals like the plague they are our political class treats them as a small price to pay to keep donors and tribal voting blocs happy.

You may be surprised to learn that instead of using this crisis to focus attention on citizens and encouraging illegals to leave — as I’ve been advocating — illegals will be getting Kung Flu checks from the Feds. The decision to use the IRS to dispense checks means every illegal who’s stolen a social security number will be getting a check and every illegal who’s committed Earned Income Tax Credit fraud will also be thanking Uncle Stupid for his 1,200 dinero.

The difference in the response to the alien virus and the illegal alien is the politicians protective detail can’t stop a virus.