President Donald Trump said in a tweet Wednesday that he told the United States Navy to shoot and destroy Iranian gunboats that provoke American military ships.

“I have instructed the United States Navy to shoot down and destroy any and all Iranian gunboats if they harass our ships at sea,” Trump told his Twitter followers. The president’s tweet comes after reports Wednesday suggest Iran’s paramilitary Revolutionary Guard launched a military satellite into orbit.

I have instructed the United States Navy to shoot down and destroy any and all Iranian gunboats if they harass our ships at sea.

Iran’s provocative move also comes amid heightened tensions between the two countries, with the pique coming after the Trump administration backed out of the nuclear deal and after a U.S. drone strike in Iraq killed Revolutionary Guard Gen. Qassem Soleimani in January.

Trump is also dealing with heavy economic headwinds as governors and mayors continue a series of economic lockdowns as a means of slowing the coronavirus spread, which has killed more than 45,000 people in the U.S. A report Tuesday from the State Department noted that Russia, Iran, and China are launching misinformation campaigns accusing the U.S. of creating the virus.

The report also suggests the trio of countries’ propaganda is also suggesting the lockdowns are providing a fatal blow to the U.S. economy. 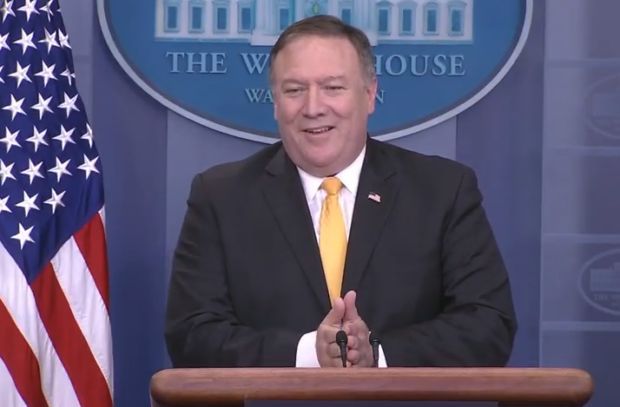 Pompeo Warns That China’s Propaganda Efforts Are ‘Increasing In Intensity’