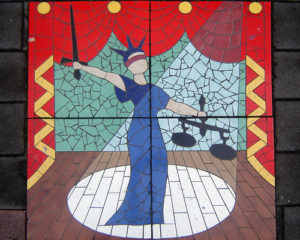 On the eve of Impeachment Tuesday in the Senate, I am acutely aware of how strong the positions of people on opposite sides of this historic event are. Both believe they are right and the other side is wrong.

When it comes to the really big truths in life, I’ve never been a fan of bet-hedging or the notion that “The truth is somewhere in the middle.” There are facts and there are what you think and feel about them. Some often confuse the two.  But with so much outright propaganda in politics today, how does one determine the facts?

The dilemma reminds me of the 2006 film, “The Departed” with Jack Nicholson, Matt Damon, Leonardo DiCaprio and Mark Wahlberg.

It’s sort of a role reversal story but the main characters don’t know they are walking in each others’ shoes until later in the film.

When the two men finally come face to face and one captures the other, both beg a well-meaning cop to shoot the other because “He’s the bad guy.”  Since the cop doesn’t have enough information, he does the cautious thing by doing nothing.

The scene is a vivid portrayal of what happens when good is portrayed as evil and evil is portrayed as good. With enough confusion, the average citizen washes his hands of the entire situation and goes to a movie—-maybe even “The Departed” where they know it’s only a movie.

In the case of Donald Trump, the Democrats don’t believe we should consider that the same players have made numerous accusations, all of which have proven to be false—many by the Special Counsel and his team. No matter how many more false accusations they make, they are never held accountable, nor do they ever concede anything. They simply pivot to even more outlandish accusations believing they’ll never be held accountable for those either.  Their motives and misdeeds are regularly revealed to the public but of course, they simply beg us to believe that their opponents (Donald Trump and anyone who supports him and his policies) are the bad guys.

The American People will be the jury come Impeachment Tuesday. They will watch the ever-virulent Democrats try to remove a stunningly successful (even by what used to be their own standards) President, on false accusations which even if true, are not crimes. Yet, the propaganda media has managed to convince a certain segment of the population that prosperity and success is dangerous and failure is infinitely preferable.

While acquittal is the likely outcome in this exercise and Democrats have known that from the start, what is most fascinating is that they think the wholly partisan smearing of Donald Trump as an “Impeached President” will help them in November. Others, like my friend Dr. Gerard Lameiro, think it’s exactly the opposite. They say the longer Democrats keep impeachment in the foreground, the more Republicans will win. I tend to agree. So Lindsay Graham, “Cool it!”

This Tuesday, as will be the case on the first Tuesday in November, the direction we decide to go as a country won’t be just a day at the movies. We will choose between right and wrong, Big government vs. restrained government, and Capitalism vs. Communism.

With issues as big as these, it’s time to know where we stand. The best answer is not “somewhere in the middle.”

Sponsored Content
2020-01-19
+Karen Kataline
0
Previous: Watch: Vice President Pence Delivers Remarks at a Church Service at Holy City Church of God in Christ
Next: Here’s What Siri Told Apple Customers When They Asked About The Identity Of Israel’s President