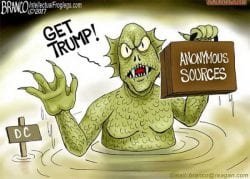 For many years, most of us have questioned how is it possible for adults in America to be so uninformed, ignorant, or even insane, right?

At a time in American history when America is obviously at its best in so many ways, Swamp dwellers are miserable and revolting against everything good and decent.

Being lectured by any adult explaining we can’t say what we just said, is a bit much, isn’t it? Why does anyone falsely believe they should become authoritative ‘speech police’ and shut down any American’s guaranteed right to free speech? Hmmm…

Then there is the ‘real world’ with sane people that frequently go to their Bibles for understanding. We know God always has an appropriate response to every need as stated in Proverbs 13:10 “Only by pride (arrogance) cometh contention (battles, war, insurrection, fights, altercations, etc.): but with the well advised (learned) is wisdom (understanding, confidence, peace).”

This Bible verse offers immense insight into the contagious insanity diseases currently infecting America. There is no way any informed sane person could possibly accept and approve what Democrats and their sycophant media is doing.

Arrogance, media, and Democrats are now one in the same icon representing insanity. Arrogance will take you no where and that is precisely where the Democrats and media sycophants are heading, quickly.

Imagine having an election in a Swamp State and celebrating a victory for Democrat Swamp Rats. Really? Unlike non-Swamp political races, Swamp states are voting for their lives – not a political race.

Swamp States survive off the teats of government. The thought of their teat going dry is their worst nightmare. They have no other legitimate careers.

Knowing that political vote counts in Swamp States are a matter of life or death, isn’t it justified to question if there is corruption within their vote counting processes and offices?

Beyond vote counting, shouldn’t we question everything going on within the entire process? Could voting machines be altered? Could those in the graveyards be voting again? Are only eligible US Citizens voting?

Were jobs and careers threatened? Could there also be criminal activities like blackmail, threats, intimidation, businesses burned or destroyed, and other nefarious activities?

Well, no one wants to imagine such things happening in America, but then we haven’t ever had Democrats involved in open criminal anti-America and anti-Constitutional activities, right?

Again, wise people seek God’s wisdom about such things, and He answers us in Psalm 10:4 “In all his scheming, the wicked arrogantly thinks: There is no accountability, since God does not exist.”

Let’s then ensure we are all on the right track with such profound characterization of the Democrat anti-God Party recalling their vote to remove and reinsert God into their platform among massive opposition.

It then becomes obvious to most that God is to the Democrat Party as is faithfulness to a whore. In other words, money is their God and doing whatever it takes to worship their God is what they do.

That’s why astute people know when a Democrat or their sycophant media accomplices say or do anything, it’s just not believable, right?

Should we ever believe there are limits to what is said or done by any Democrat running for public office in a Swamp State?

Can anyone recall the Trump/Russia, Kavanaugh/Ford, or Trump/Ukraine hoaxes? Were there any restraints or boundaries imposed on the Democrats and media during these criminal acts?

No! Instead, there were ‘breathless’ minute by minute national announcements proclaiming proof of illegal activities and impeachment of a duly elected President and Supreme Court Justice is required to satisfy the US Constitution.

However, we are now learning Democrats and their media accomplices are complicit in illegal activities. Meanwhile, Democrats are using the US Constitution, a document they want to shred, as the reason behind their impeachment activities. Hmm…

Let’s then not forget God’s word that put life into perspective. Proverbs 13:10 Through insolence (arrogance, elitism) comes nothing but strife (hate, arguments, no answers), But wisdom (fact, truth, solutions), is with those who receive counsel (factual education).

When any group (mob) is minus Godliness, full of arrogance, drunk, and have no boundaries placed upon their activities, anything must and should be anticipated.

Democrats have no shame and are totally out of control. Laws and justice be damned!

They are grasping at anything to impeach a duly elected President instead of abiding by the US Constitution and replacing him at the voting booths.

Meanwhile, they are wasting millions of taxpayer money to accomplish their nefarious schemes and not spending even a minute to protect and enhance the lives of US Citizens.

They must be removed from office and prosecuted!

Support Conservative Daily News with a small donation via Paypal or credit card that will go towards supporting the news and commentary you've come to appreciate.
Tags
Democrats Politics Politics