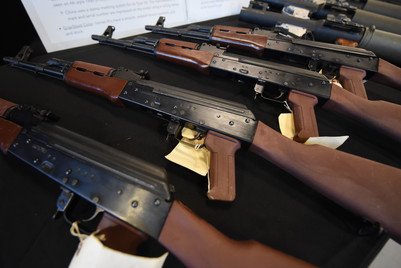 Iran relies in part on terrorist organizations, proxy groups, and militant partners to protect its interests and to further its agenda of expanding influence in the Middle East, a defense official said.

Christian Saunders, a senior Defense Intelligence Agency analyst for Iran, spoke to Pentagon reporters today ahead of the release of the new report titled “Iran Military Power” — the third in a series that also includes China and Russia.

“As Tehran expands its capabilities and role as both an unconventional and conventional threat in the Middle East, it is more important than ever that we understand Iran’s military power and the threat it poses to our interests, our allies, and our security,” Saunders said.

The use of unconventional capabilities, including the use of partners and proxies, is one of three core capabilities the Iranian regime uses to ensure its own survival and secure a more dominant position in the region, Saunders said.

To advance their agenda, Iran, he said, provides financial, political and material support, as well as training, to groups that include Hezbollah, Iraqi Shia militias, the Houthis, some Palestinian groups, the Taliban and Bahraini Shia militants.

With an antiquated military, he said, missiles play a large role in the Iranian military effort.

“Iran has embraced ballistic missiles as a long-range strike capability to dissuade its adversaries from attacking Iran,” he said, adding that Iran’s arsenal includes short, medium and long-range ballistic missiles that can strike targets throughout the region as far as 2,000 kilometers away.

Saunders said he expects Iran will focus now on increasing the number of more accurate and lethal ballistic missiles, as well as fielding land-attack cruise missiles. Its space launch vehicle program, he said, might also serve as a testbed for the development of intercontinental ballistic missile technology.

Iran is strategically positioned along the Persian Gulf and the Strait of Hormuz and maintains naval forces capable of threatening navigation in those strategically important waterways, Saunders said.

Saunders said Iran’s continued use of cyber capabilities as a safe, low-cost method of collecting intelligence is a concern to the U.S. — and it’s something they continue to improve on.

He also said that, while Iran has no nuclear weapons, it continues to ignore commitments it made as part of the Joint Comprehensive Plan of Action.

Sanders said in July, the International Atomic Energy Agency confirmed Iran had exceeded limits it agreed to as part of the joint plan of action.

Additionally, he said that while now Iran is prohibited from buying most kinds of weapons from foreign powers due to a United Nations security resolution, that limit will expire in October.

That expiration provides Tehran with an opportunity to acquire some advanced capabilities that have been beyond its reach for decades, Saunders said.