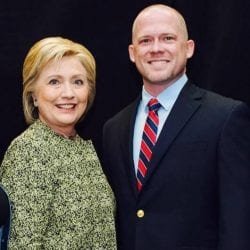 Does anyone know why the Democrat Party has chosen to make war against Children? It’s even more confusing when you consider their demand for Black votes while destroying millions of Black children, right?

Only after Jeffrey Epstein came on the news radar did most Americans understand the massive scale of involvement and depths of depravity involved with sexual perverts and the US Political parties. Now that it’s exposed, do American citizens remain idle, complacent, and unconcerned?

The most probable question to ask is how long has Child Sex trafficking been a major part of mainstream Washington DC and the mainstream media, right?

First, let’s not be shocked because for decades America has watched politicians say one thing to get elected then go to DC and do the contrary! Unfortunately, we only imagined they had become liars instead of victims of blackmail!

As an example, does anyone remember when the Clintons were in ‘good standing’ in Arkansas? Does anyone recall the photo of Hillary and a big-time political promoter, Harold Moody?

Former head of the Democrat Party, Harold Moody, worked for Pulaski County Youth Services in Little Rock, AR. He was arrested on November 5, 2018. The criminal charges were for promoting pornography of children and live streaming chat rooms where infants were being raped. Let’s also not forget subsequent charges of promoting and use of illegal drugs.

Does anyone believe his hiring at the Pulaski Youth Services was an accident? Could it have been a reward for following Democrat Party efforts? Certainly, it had to be a payoff to allow the fox to guard the hen house!

Should we wonder if the Clintons, Obamas, Congressional Leaders, and other prominent political families were not aware of his ‘real’ specialties? Oh wait, this just in… the Clinton Health Matters Initiative and its partners, were working with Pulaski County Youth Services.

Guess we shouldn’t question what the term ‘working with’ would mean in this case, right? Well, guess there is no more to this story… oops but there is much more.

In addition, Moody had close friends and associates like Chad Griffin who is head of the Human Rights Campaign (HRC), and Jason Wiest co-host of The Big Gay Radio Show and former deputy director of communications at the office of Governor Mike Beebe.

When Moody’s Facebook page was active, there were hundreds of photos with politicians at political events across America. Yes, his ‘personality’ was contagious and that was what made him a big hit at Democrat Party gatherings. ):

In addition to the Epstein and Moody stories of child sex trafficking involving the Clintons and other high ranking politicians, let’s not forget another friend of the Clinton’s, George Nader.

Nadar posed as a Middle East analyst who worked with the Clinton administration and received a congressional tribute for his work on his magazine, after an exclusive interview with former President Bill Clinton.

The only direct links that Mueller was able to confirm were with the following: John McCain, Dianne Feinstein, Mitch McConnell, Joe Biden, George W. Bush, and Bill Clinton. The foreign contact links were Saudi Arabia’s Prince Alwaleed bin Talal, Muammar Gaddafi, Yasser Arafat, and others. To be fair, let’s not automatically assume these were nefarious relationships.

Then again, would it be prudent to presume Nadar’s activities with prominent political figures was to only focus upon analyzing Middle Eastern concerns? He had to be a stand-up guy or Mueller wouldn’t have solicited his efforts to hang President Trump, right?

Corey Lynn is an investigative journalist who reported: “According to court records, Nader was indicted in 1985 for importing child pornography containing movie films titled “Boy No. 53” and “Sweet Little Sixteen, Volume 3, No. 8.” The material contained nude children engage in various sexual acts.”

For the Clintons and other Democrats, there is nothing more important than power and money. Let’s make sure we all understand that child sex trafficking is a $150 billion dollar plus industry with unreported income that is tax free.

That means having a never-ending well of massive amounts of money overflowing with enough to constantly take out political opponents through false allegations and their paid for media sycophants or damage them through the Democrat reliable court systems.

Imagine just receiving a tiny percentage of these massive amounts of money. It’s still staggering. Wonder why Republican candidates are constantly confronted with vicious fake stories of sexual abuses and other crimes by fakes pretending to be serious accusers?

Wonder why Democrats are not accustomed to losing anything? Wonder why their heads explode after so many faux stories against President Trump that didn’t work? Could it be because Republicans are notorious for never fighting back?

Rest assured, this is merely a ‘tip of the iceberg’ when it comes to dirty dealings by the Democrats. Much more exposure must be given to their other nefarious business activities such as sex slavery and illegal drugs.

What must be understood is until they meet with the Republicans to take down the welcoming signs for child sex traffickers, sex slavery, and illegal drugs coming to America, they are profiting on this sickness and are criminal accomplices.

Sex trafficking is a crime! Participation in any criminal act makes one an accomplice. Why isn’t the DOJ making arrests? Are they involved, too?

Yes, we must keep praying a day will come when light will shine upon Democrat criminal activities – even their involvement in such unconscionable evils.

After all, America managed to deal with one violent wing of the Democrat Party, the KKK. There is always hope!

Until then, let’s join one another in prayer to urge law enforcement offices to prosecute these high-ranking officials, regardless.

Of course, we must seriously pray for ways to help restore the lives of our innocent children that have been destroyed by the Democrat’s greed for money and power.

Proverbs 1:16-22 For their feet (evil doers) run to evil and make haste (focused upon destruction) to shed blood. Surely in vain (innocence) the net is spread in the sight of any bird (object). And they lay wait (remain in the shadows) for their own blood (turning upon one another); they lurk privily for their own lives. So are the ways of every one that is greedy of gain; which taketh away the life of the owners (innocent) thereof. Wisdom (Godliness and His Words) crieth without (available to all); she uttereth her voice in the streets: She crieth in the chief place of concourse, in the openings of the gates: in the city she uttereth her words, saying, How long, ye simple ones (bullies full of greed), will ye love simplicity (stupidity)? and the scorners delight in their scorning (bullying), and fools (the greedy) hate knowledge (wisdom)?

If you would like to have more information about the Democrats and some of their schemes, please click HERE.