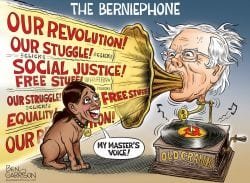 Can anyone deny the fact that Hollywood is the driving factor behind the Democrats losing members and its popularity? Since the reign of President Clinton, no national organization has suffered such massive member losses and become more disrespected than the Democrat Party.

1 Timothy 6:2-5 And they (slaves) that have believing (Godly) masters (slave owners), let them not despise (do not be disrespectful) them, because they are brethren (students of God); but rather do them service (serve them to the best of one’s abilities), because they are faithful and beloved, partakers of the benefit (ever learning and have gained eternal salvation by accepting Jesus Christ as their Lord and Savior).

These things teach and exhort (proclaim this message to all). If any man teach otherwise, and consent not to wholesome words (Godly teachings), even (especially) the words of our Lord Jesus Christ, and to the doctrine (Biblical truth) which is according to godliness; He is proud (arrogant), knowing nothing (ignorant of critical thinking), but doting about questions and strifes (pontificating about BS creating problems for everyone) of words (illogical), whereof cometh (breeds anti-Godliness) envy, strife, railings, evil surmisings (all sorts of sins of depravity leading to destruction), Perverse disputings (eloquent meaningless speeches filled with lies) of men of corrupt minds (liars), and destitute (can’t even guess about reality) of the truth, supposing that gain (financial wealth and power is all that matters) is godliness: from such withdraw thyself.

Every day, America is watching a massive national organization shrink and become more and more irrelevant. Along with them, all of their accomplices are being exposed as ‘fools’ for their undying support and loyalty.

Democrats have succeeded in turning professional athletes and US Corporations into idiotic loyal stooges that shame the most faithful followers of Hitler. Their sycophant mainstream media is now a total joke.

Regardless, they falsely believe that if they travel the same road in tandem the rest of America will eventually enjoy their new directions into becoming hard core.

Leaders of the Democrat Party have moved their organization from sand onto quicksand as we watch them parade across America proudly beating their chests and espousing nothing but anger, lies, and promoting decadent lifestyles.

Yes, Timothy was so predicatively accurate about warning us to ‘withdraw’ from such rebelliousness. Decadent activities don’t build anything but instead destroys and leaves the landscape bare and wanting. Just inspect all Democrat managed cities!

Democrats are the only political party celebrating illegal drugs coming into America that destroy and extinguish the lives of thousands of Americans every month.

Democrats are the only political party celebrating child sex trafficking that destroys the lives of children even before they have a chance at life and careers.

Democrats are the only political party that celebrates not passing bi-partisan legislation that would benefit all Americans and even most of the world.

Democrats are proud, boastful, and celebrate any opportunity to destroy Godliness, the US Constitution, our elections, personal freedoms, and human rights.

Like most Americans who have learned through life experiences, we must once again turn lemons into lemonade. Democrats could not have painted a clearer picture for America’s 2020 elections.

For 2020, Democrats have nothing positive to offer any American. They are a proud irredeemable political party fixated upon the destruction of America and its Judaeo-Christian values.

Support Conservative Daily News with a small donation via Paypal or credit card that will go towards supporting the news and commentary you've come to appreciate.
Tags
Clinton Democrats Politics