Breitbart News reports 80 percent of the female migrants to the USA’s heartland are sexually assaulted during the trip. Yet the heartless Trump administration remains relentless and will continue with its plan to force the USDA’s Economic Research Service to move to Missouri. 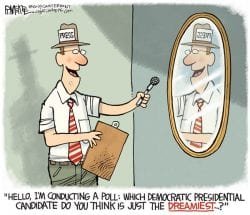 Wait. I’ve mistakenly conflated two stories. The sexual assault victims are willing illegals heading for our interior, while the USDA folks are unwilling migrants threatened with moving vans by the Orange Tyrant.

It’s an easy mistake to make. The WoePost’s coverage of the move has been so tear–jerky one could mistake Donald Trump for Democrat Andrew Jackson driving Cherokees from Georgia.

Here’s a recent headline: “The USDA relocation to Kansas City is ripping apart the lives of its employees.”

Wow, that sounds like the pre-dawn raid on Paul Manafort’s house!

Only there’s no drama. It’s 2200 words of hysterical pathos. The tale of travail begins with an alphabet crusader. He’s a 28–year USDA employee being asked to move for the first time. The story begins, “Randi Johnson raised the picture of her dead son’s football team.” Followed by a reference to “Her dead wife’s high school yearbooks.”

It looks like the standard media elite’s same–pronoun marriage mixed with a double personal tragedy.

Only it’s not. Events were condensed for drama. Johnson’s marriage was perfectly normal when his wife died of cancer 11 years ago. It only became retroactively irregular — scrambling the pronouns — when Mr. Johnson decided he was Mrs. Johnson three years ago. Two years after his son’s overdose death.

It’s confused and sad and none of it was caused by a moving van.

The same goes for the other examples. One is a normal family that bought a “forever home” just prior to the announcement of the move. Her job was a bit like working in a call center. “At the NIFA, she spent most of her time on the phone talking to researchers, farmers and small businesses with ideas for new farming techniques or products.”

She even met the odd farmer in his natural habitat, “Occasionally, she took road trips around the country to meet people face-to-face, one of her favorite parts of the job.”

However, the prospect of living among the “people” in Missouri was something else entirely.

The last victim is a 33–year–old who’s been there four years. No wife. No pets. He’s leaving a girlfriend he met on the web.

Let’s put this in perspective for people living in the coastal bubble. By the time I was a junior in high school the oilfield supply company my father worked for had moved us from Duncan, OK to Great Bend, KS; back to Duncan; then from Duncan to Oklahoma City; from OKC to Midland, TX and then from Midland to Dallas, TX.

The longest we stayed anywhere before Dallas was four years. Coastal snobs often dismiss inland unemployment by telling the jobless to move to where the jobs are. That’s exactly the situation here, but somehow, it’s a relocation tragedy.

The military is government and it moves people around in a regular fruit basket turnover without catching the eye of the Opposition Media. The difference is these USDA people have doctorates. They’re supposed to be immune to everyday cares and concerns once they go to work for the government.

Normal mom is unhappy she had only a year to prepare, the destination was uncertain because various municipalities were abasing themselves before Uncle Sam, hoping to land these highly–paid bureaucrats.

Compare that with Carl Icahn’s government move. The high taxes in New York supporting that bloated government are driving him to Florida. He announced his move with six months’ notice and as Bloomberg put it, “…employees who don’t [move] won’t have a job.”

The USDA move is expected to save $300 million over 15 years. It could save even more if the department resists the urge to replace all 366 employees who quit rather than be forced to bed down with hillbillies.

Even after wading through the WoePost’s angst–fest, the irony is all three employees had a happy ending. Mr. Johnson retired and moved to a beach town because “[he] always wanted to live near the ocean.” Plus, it’s closer to his grandchild.

Our homebuyer did indeed purchase a “forever home” because no one moved. She took a new job where she’ll be asking for government money instead of distributing government money.

And our single has taken a job at my alma mater, the University of Oklahoma, where he can enjoy a fine campus and a great football team.

For taxpayers, plans change. Life goes on. Only the government entitled attempt to make a federal case out of it.