Ilhan Omar has turned her back on the American people with her actions over the past several days. Oppressive Omar has been telling her supporters that the United Nations needs to be brought in to run the processing of migrant people at the southern border. She has just suggested that the United Nations be allowed to control who can enter into the United States. She wants to hand over control of the government to foreign powers and let them dictate how this country is to be run.

She honestly believes her party’s propaganda that the migrant people are being abused at the southern border. When she and her tour group took their little field trip to the border to view the issues they only saw what they were told to see by pushy activist groups. They looked past the truth and reported on the lies. That is one reason why she and wormy Ocasio-Cortez could take and post fake pictures of themselves at the border. They did not even see the real picture because they were too wrapped up with taking selfies of themselves.

Stupid Omar believes that the United States is losing ground morally when it comes to the border issue. She doesn’t even have a moral bone in her body because she and her three sappy friends have voted against providing funds to help make the conditions better at the border. She has done nothing to help the situation and has voted to make things worse. Inviting the United Nations into the problem is her way of destroying America which is what she and her Islamic terrorists want to see happen.

She believes that human rights violations are being committed on American soil. The only violations that are being committed in America are the ones that she is committing by cheating on her family with another married man and using campaign money for her personal use. So Omar is the true criminal and not the border agent heroes that are keeping the country safe form illegals entering into the nation

Recently when speaking at the Iowa People’s Presidential Forum which is a group sponsored by liberal progressives she argued the United States needs a president who “realizes we are not just fighting for one election; we are fighting for the very soul of our democracy and what society we want to become. “Scientifically, anything that is less than helping us cut carbon emissions in half by 2030 is going to be too late,” she said. “It’s a start, and I think that what that has shown is a dramatic shift in the right direction, but we need to keep pushing for a plan that is at the scale of the problem.”

Sorry Omar, but the soul of democracy you are talking about is not the same soul the American people want if they want to remain free and Trump is doing that in spite of your propaganda and lies to the people.

Pushy Omar is responsible for many sad and terrible things since she has taken a seat in Congress. She has voted against giving border patrol the money and equipment to make things better at the border. She has illegally done things that should eject her from Congress. And she even lies about her actions like every good Democrat does. She never accepts responsibility for her mistakes and never will as she believes that she is always right and everyone is always wrong.

Omar would seek to abolish the very law enforcement programs that keep America from being overrun by invading forces. She would rather take what true Americans have and give it to the people that are here illegally. She would see that health care be free for illegals, and she would see America run from another part of the world. She is so anti-American that she bleeds Islamic Terror.

Omar was once a migrant that came to America because she was being treated badly in Somalia. She came to America with her hand out and was granted the right to be an American. When America helped her she turned her back on those very people that helped her. She now seeks to destroy and murder those that would keep her safe and the freedoms that she now enjoys. Omar truly does not grasp the full picture of what being an American is all about.

President Trump is right that Omar and her friends need to get out of Congress. They are a problem that is going to make things worse in the future for Americans. They cannot agree on anything and stand against everything right.

Recently Ilhan Omar attempted to scrub from the Internet a piece of evidence that she married her brother, Ahmed Nur Said, to get him U.S. citizenship and commit immigration fraud.

No wonder she doesn’t want the Department of Homeland Security to even get $1 in funding to enforce immigration laws.

She’s already under investigation by the FEC and the state of Minnesota, and the Alabama GOP called for her expulsion from Congress. This could be the final blow to expel her.

Omar has kept her family history very quiet. But it was uncovered that in 2013, Ilhan Omar wished her father, Nur Said, a Happy Father’s Day and thanked “Allah” for him.

Omar thought she could delete the traces of her sick marriage to her brother in order to cheat the United States immigration system, but American citizens are exposing the truth and holding her accountable.

Why? Because Americans are FED UP with Omar’s scandals:

The Constitution grants the authority to expel members of the House of Representatives. Omar MUST be expelled along with her other squad members also who are spouting Anti-American ad Anti-Semitic statements that do not belong in our Congress. If she says she was treated better in a Kenyan refugee camp than here in the U.S. then she should return there and take her other squad members who also continuously bash America with her. 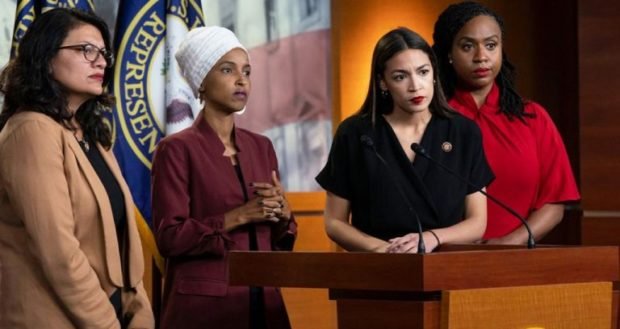