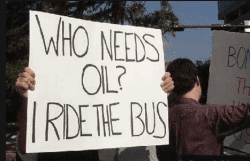 Does anyone recall the massive uprisings by Democrats chanting, “War for oil?” The peculiar thing about this Democrat Party faux outrage against Republicans, is America never got any oil from the wars.

Oh well, like all Democrats and their media sycophant outrages, facts and truth never matter, right? It’s always about finding an issue that allows them to profit off the backs of the uninformed and ignorant.

This brings us to the current crisis in the world after the attack on Saudi Arabian oil fields. Many believe Iran was the country behind this awful attack.

In turn, shouldn’t that lead us to question if Democrats were supporting the Iranian government? After all, didn’t they give Iran billions of dollars?

Didn’t John Kerry, who was encouraged by Hillary Clinton, Barack Obama, Joe Biden, and other Democrats, meet with Iran and tell them President Trump would not be in office that much longer so don’t worry about undoing the US Agreement with Iran?

Oh yes, should we forget about John Kerry and his warmongering support group signing documents to allow Iran to develop nuclear weapons of war? To do so meant dishonoring and placing our most loyal Middle East ally at risk?

We all should assume that with someone like President Trump demanding an investigation, America may have even more surprises coming out of the anti-American Democrat Party, State Department, FBI, and DOJ, right?

The loss of this amount of oil production feeding the world will not go unnoticed – regardless whether one supports oil or not. Only Democrats will celebrate many millions suffering.

This bombing upon innocent people may lead to another war. At the least, it will force liberals and the world to rethink their positions on energy.

Is there any sane person believing wind and solar energy production will now supplant the demands for this amount of fossil fuel (by the way that term is so misguided) production?

The loss of this amount of oil production will harm many millions of people around the world – not just Saudi Arabia. California chose to select Saudi Oil as their preference over US Oil after President Trump was elected.

Today, gasoline prices will begin to soar in countries around the world and continue to soar until they find a way to replace Saudi oil production. While other State prices at the pump were around $2 per gallon, California prices are already exceeding $3.80.

Do you think Democrats are alarmed about how the price of gasoline affects the poor and middle class? When California elites have their chauffeurs fueling their limos, it’s doubtful they even notice the prices or could care less. Just another example of how two-faced Democrats are!

Of course, many Liberals talk down their noses to me explaining they have electric cars. When I ask where the energy comes from to charge their batteries, I instantly become a racist, sexist, homophobe!

Liberals routinely point to their source of greatness and wisdom using New York and San Francisco as their ‘Mono Lisa’ of beauty, refinement, success, elitism, and justification for the rest of us to be like them – if that could ever be possible!

However, the rest of the world sees through their arrogant fog and recognizes them for their decadence, ignorance, filth, and Godless lifestyles.

Meanwhile, Democrat leaders along with Russia and Iran are demanding we ignore the value of fossil fuels so America can return to medieval years and mimic Middle East Arab states.

What happens next – regardless of war, may force Democrats out from ‘la la land’ and make then return to the real world to confront issues with real resolutions and accountability.

Could resolving these issues become more important than wasting taxpayer money and time impeaching Justice Kavanaugh or President Trump? Would it be worth their while to investigate the DOJ and FBI to ensure America never has another Presidential coup?

If not now, then when will Democrats stop chasing false narratives and their ridiculous phony un-American lusts? Wouldn’t it be great to have a few Democrats willing to help make America greater?

Imagine what could be accomplished if Republicans and Democrats could join efforts in a united effort to get behind President Trump in his heroic turnaround of America by elevating the lives of all citizens?

Then again, many tell me the Democrats are so dumbed down it would be impossible for them to grasp all the nuances involved in being pro-American. In their mindset, we quickly learn they believe it is more blessed to hate than love.

How is it possible for hate to win over love? When anyone allows hate to become their primary motivator, nothing positive can be expressed or envisioned.

In other words, we must now recognize the Democrat vision for America comes from having their optic nerves connected to their anus.

Just like the disaster happening in Saudi Arabia, Democrats have done the same to America – just not with military attacks. Democrats have declared war against America using judges, Congress, and the media to bomb us.

Like Saudi Arabia, America must now also regroup, rebuild, and repair the damages caused by hateful warmongering Democrat Party attacks. We must all pray for a successful recovery.

Proverbs 11:1-31 A false (hateful) balance is abomination to the LORD: but a just weight (Godliness including love toward one another) is his delight. When pride (arrogance) cometh, then cometh shame (their fall): but with the lowly (Godly) is wisdom.

The integrity of the upright (those who follow God’s mandates) shall guide them (give light into their pathways): but the perverseness (hate, warmongering) of transgressors (un-Godly) shall destroy them.

Riches profit not in the day of wrath (when the fall comes): but righteousness delivereth from death (keeps us winning – no matter what). The righteousness of the perfect shall direct his way: but the wicked shall fall by his own wickedness.

The righteousness of the upright shall deliver them: but transgressors shall be taken in their own naughtiness (they destroy themselves). When a wicked man dieth, his expectation (thoughts supporting his self-righteousness) shall perish and the hope of unjust men perisheth. The righteous is delivered out of trouble, and the wicked cometh in his stead (see the ways of their evilness).

An hypocrite with his mouth (maligning and false witness) destroyeth his neighbour: but through knowledge (fact and truth) shall the just be delivered. When it goeth well with the righteous, the city rejoiceth: and when the wicked perish, there is shouting. By the blessing of the upright the city is exalted: but it is overthrown by the mouth of the wicked.

He that is void of wisdom (ignorant) despiseth his neighbour: but a man of understanding holdeth his peace (loves one another). A talebearer (fake and malicious lies) revealeth secrets: but he that is of a faithful spirit concealeth the matter (remains silent to protect those we love).

Where no counsel is (guilty until proven innocent), the people fall: but in the multitude of counsellors (innocent until proven guilty) there is safety. He that is surety (witness) for a stranger shall smart (be blessed) for it: and he that hateth suretiship (lies) is sure (going to be chastised).

A gracious woman retaineth honour (when Godly): and strong men retain riches (when Godly). The merciful man doeth good to his own soul: but he that is cruel troubleth his own flesh (destroys everything and his families). The wicked worketh a deceitful (hidden agendas) work: but to him that soweth righteousness shall be a sure reward (guaranteed success). As righteousness tendeth to life: so he that pursueth evil pursueth it to his own death (will die in disgrace). They that are of a froward heart (hate filled) are abomination to the LORD: but such as are upright (loving and gracious) in their way are his delight.

Though hand join in hand, the wicked shall not be unpunished: but the seed of the righteous shall be delivered (not only the person but their seed shall also be blessed). As a jewel of gold in a swine’s snout (why would anyone waste gold on a pig), so is a fair woman which is without discretion (a woman void of self-respect and virtue).

The desire of the righteous is only good: but the expectation of the wicked is wrath (damnation). There is that scattereth (gives freely), and yet increaseth (gains more); and there is that withholdeth more than is meet (refuses to do what is best), but it tendeth to poverty (destroys his own life).

The liberal (generous) soul shall be made fat (prosperous): and he that watereth (offers to care for others) shall be watered (receive) also himself. He that withholdeth (refuses to share) corn, the people shall curse him: but blessing shall be upon the head of him that selleth (employs principles of capitalism) it.

He that diligently seeketh good procureth favour: but he that seeketh mischief, it shall come unto him. He that trusteth in his riches (things status, power, and money are all that matters) shall fall but the righteous (Godly) shall flourish as a branch (trees full of fruit).

He that troubleth (brings shame) his own house shall inherit the wind (blown away): and the fool shall be servant (slaves) to the wise of heart (Godly). The fruit of the righteous is a tree of life (the cross that gives everyone the chance to inherit eternal life); and he that winneth souls (witnesses Godliness) is wise. Behold, the righteous shall be recompensed in the earth: much more (unlike) the wicked and the sinner (un-Godly).

Support Conservative Daily News with a small donation via Paypal or credit card that will go towards supporting the news and commentary you've come to appreciate.
Tags
Democrats Iran liberals Oil saudi arabia