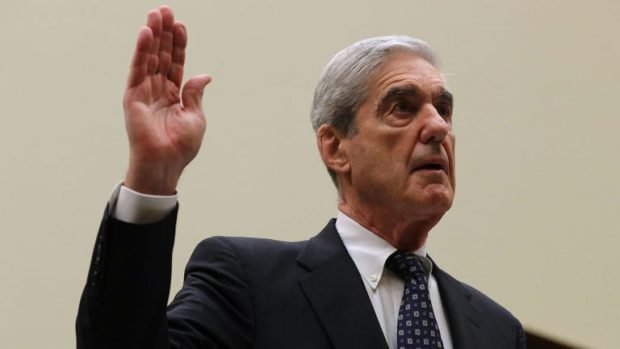 Former FBI Director Robert Mueller testified before the House Judiciary and Intelligence committees on Russian Collusion in the last election and involvement in the Trump campaign on Wednesday, July 24th.

Heading the Judiciary Committee was rep. Gerald Nadler who has been a constant critic of Trump and led off with a scathing rebuke of Trump.

Mueller didn’t want to testify and it was unusual for a prosecutor to testify in such circumstances, but he did so voluntarily. Muller did not look well with deep circles around his eyes, dark baggy cheekbones and his voice seemed to quiver as he seemingly stuttered and stammered through rapid-fire questions. Each member was allowed five minutes to ask questions and wanted to get as much in as they could so they asked fast and frequent questions. Muller refused to answer over 200 questions and answered in one-word answers like “yes,” “no”, “That is not in my purview” and saying for the members to refer to his report. Many times he had to ask the members to repeat the question and he came across very feeble and seemed to not know his own report. He didn’t seem in charge and people who knew him said he wasn’t himself or the Robert they once knew. He appeared very dazed and confused. I almost felt sorry for him as I wouldn’t want to be in that position in a million years.

Sitting next to Muller was his long-time lawyer Aaron Zebley to help him testify if needed. President Donald Trump bashed former Special Counsel Robert Mueller for bringing Aaron Zebley to assist him while testifying to Congress.

“So Robert Mueller has now asked for his long-time Never Trumper lawyer to sit beside him and help with answers,” Trump wrote. “What’s this all about?”

Trump pointed out that Zebley was the former lawyer for Justin Cooper, the IT aide who helped Hillary Clinton set up her private email server.“This should NOT be allowed,” he wrote. “Rigged Witch Hunt!”

Trump said that Zebley’s role assisting Mueller was never part of the agreement.“This was specifically NOT agreed to, and I would NEVER have agreed to it,” he wrote. “The Greatest Witch Hunt in U.S. history, by far!”

“So Democrats and others can illegally fabricate a crime, try pinning it on a very innocent President, and when he fights back against this illegal and treasonous attack on our Country, they call It Obstruction?” he wrote. “Wrong!”

Several Republicans at the hearing asked Mueller about people such as Christopher Steele, Lisa Page, James Comey, Peter Strzyk and Mueller pleaded innocent of their political affiliation with the democrat party or just refused to answer.

The democrat interrogators displayed their blatant disregard and hatred for Trump by their collective mantra “No one is above the law and he should be held accountable.” These statements showed their disregard for the rule of law that says innocent until proven guilty, but turn a blind eye when it comes to their gal Hillary and her disregard for the law and acting above the law with her multiple crimes and obstruction of justice that they were accusing Trump of doing. Several times they asked Muller if a president can be indicted after he leaves office to which Muller replied that he can.

Sheila Jackson Lee hammered away at Muller about obstruction of Justice charges listed in the report and Rep. Steve Cohen hammered Mueller about Trump repeatedly asking Jeff Sessions to un-recuse himself.

Republican Rep. Steve Chabot (R. Ohio) hit the nail on the head when he said. “This hearing is all about the Democrats trying to build a groundswell movement across the nation to impeach President Trump.”

He is so right. This is all about overturning the election. These democrats have never gotten over the fact they that they lost.

In the afternoon Muller returned to face the House Intelligence committee headed by Adam Schiff and Devin Nunes.

Devin Nunes said in his opening statement that this entire hearing was formed by people who felt their destiny was with a Hillary Clinton Administration and wanted to make this report a television event. He compared them looking for Russian collusion to the Loch Ness Monster who people claim is there although no one has seen it.

The report doesn’t exonerate the president but doesn’t reach the conclusion that he committed a crime. The President was not charged with any crime though the democrat members tried their hardest to make it so in the hearing.

Schiff wondered if trump was serving us or serving his own financial interest by wanting a Trump Tower in Russia. I’d say by having the lowest unemployment rate in 50 years in all demographics, people having more money in their pay and social security checks because he lowered the FICA tax, more people off of welfare and food stamps than in recent years, making us energy independent for the first time in 70 years keeping gas and oil prices down and not dependent on OPEC anymore because we are drilling here now, having the lowest tax cuts for everyone, causing companies to come back here from overseas in droves proves he’s serving the people. Something Hillary Clinton could not establish. If Russia helped Trump to win then I say whatever it takes if that is the result.