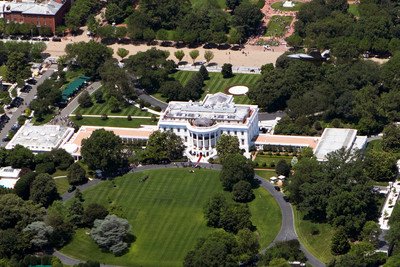 More than a year of intense Defense Department-led negotiations between the United States and Poland have yielded an agreement that involves additional U.S. infrastructure in Poland, as well as an increase in the number of U.S. rotational forces that operate there.

“As stated in the joint declaration, the U.S. and Poland continue to enhance our security cooperation,” Trump said. “Poland will provide basing and infrastructure to support military presence of about 1,000 American troops. The Polish government will build these projects at no cost to the United States. The Polish government will pay for this. We thank President Duda and the people of Poland for their partnership in advancing our common security.”

The president also thanked Poland for meeting the security demands of NATO, saying that insofar as burden-sharing is going, Poland is contributing its fair share to NATO.

“It is among eight NATO allies, including the United States, currently meeting the minimum 2% of [gross domestic product] … for defense spending,” Trump said. “And Poland is there.”

Duda said the agreement is a “calm but consistent policy” in terms of security cooperation between the United States and Poland.

“This is of breakthrough character,” Duda said. “It moves us to another era. So far, we can say, the Americans were testing the situation in Poland, how it looks, how it feels — what about logistics, whether it is possible to stay in Poland and to successfully attain the goals and implement the tasks of a defensive nature.”

Duda said he thinks U.S. military leaders have determined it is possible to do those things, and this is why the agreement was signed. He also said rotational forces are a good choice.

Acting Defense Secretary Patrick M. Shanahan said the signing of the agreement underscores the shared values of the United States and Poland, and will serve to strengthen defense ties between the two nations.

“Enhanced bilateral cooperation in security will deepen our Polish-American partnership, which is vital to addressing today’s current threats and challenges,” Shanahan said. “We look forward to this continued defense relationship, and friendship, for years to come.”

While the United States doesn’t permanently station forces in Poland, it does maintain a rotational force in the country. On average, about 4,500 rotational U.S. military personnel are in the country during any month. According to the agreement, the presence is expected to grow by about 1,000 personnel. Those troops will provide additional defense and deterrence capabilities in Eastern Europe.

“…Over time, our shared history of military cooperation, collaborative partnerships, and continued commitment to security in the region have resulted in a strong and prosperous friendship.”

The declaration also indicates the United States will establish a division headquarters in Poland, and that a combat training center will be established at Drawsko Pomorskie in northern Poland for use by both U.S. and Polish forces. Additional training centers around Poland are also called for.

Under the agreement, the U.S. also plans to establish an intelligence, surveillance and reconnaissance squadron in Poland made up of U.S. Air Force MQ-9 Reaper unmanned aerial vehicles, to establish an aerial port in the country, and to build infrastructure to support an armored brigade combat team, a combat aviation brigade and a combat sustainment support battalion.

Initial infrastructure to support this U.S. growth in Poland, as well as establishment of a U.S. special operations capability and an area support group, are expected to be funded by the Polish government, at no cost to the United States.

“Both countries seek to conclude international agreements and other arrangements necessary to realize the common vision for enhanced defense cooperation, including the streamlining of the functioning of the U.S. forces in Poland,” the agreement reads. “The United States and Poland are to have a regular process to consult and plan for potential force posture adjustments and related infrastructure requirements for the U.S. forces deployed to Poland.”

Previously, Poland had been a member of the Warsaw Pact with the Soviet Union from 1955 to 1991. As a member of NATO since 1999, Poland now is looking to expand its contribution to the common defense of NATO partner countries. The U.S. will help Poland to accomplish that goal, Shanahan said.

“The United States and Poland have a long-standing and fruitful defense relationship. Over time, our shared history of military cooperation, collaborative partnerships, and continued commitment to security in the region have resulted in a strong and prosperous friendship,” Shanahan said. “There is no question among NATO allies that the U.S. military presence in Poland contributes to security in the region, providing deterrence and strengthening the alliance, and that by enhancing that presence, we will continue to ensure democracy, freedom and sovereignty.”