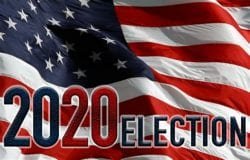 Consider the reality that a large percentage of the Democrat Socialist Party is desperately wanting to go back to National Socialism (Nazism) – a political ideology so evil it practically destroyed the world 75 years ago!

Democrat Socialism is truly a “Life or Death” religion (if you believe, you live; if you don’t, you die). That’s why America must approach the 2020 elections with a greater concern than any election before.

Should the Democrat Socialist gain majority seats in Congress, the damages could devastate our children, grandchildren, and great grandchildren for decades! In addition, just as it happened in countries experimenting with Socialism, it always ends badly like World War I & II, Korean War, and the Vietnam War.

Democrat Socialism is not just a political religion, but a contagious terminal disease that spreads like wildfires. Like all Satanic Religions, Socialism is always presented as a cure for every problem in the world and/or a sort of Heaven on earth – but it quickly turns into Hell.

As we move closer to the election date, Americans must be informed that Democrat Socialist leaders are taught to lie, deceive, and do whatever it takes to obtain their ultimate goals – total power and all wealth in the hands of a few ‘chosen’ comrades. The system is based on a flawed foundation: “Make everyone poor!”

Total chaos is their goal (just look at their success on our Southern Border). Their rulership is by the sword – not the courts, as there is no longer any presumption of innocence! Disobedience could mean death and there are no appeals.

When Democrat Socialists are in control, everything formerly taken for granted is rationed or no longer exists. The wealthy are sucked dry and there are no others to replace them so the financial well quickly runs dry.

Unfortunately, Democrat Socialists can’t help themselves due to their ravenous lust for total power and money! Democrat Socialism has “no appeal” other than lying about “free, free, free” this and that! Even uneducated gullible people know there are no free lunches!

If Hillary had only won, they would be ramping up their tyrannical plans to confiscate our weapons, incarcerate dissidents, and opening labor camps. For Democrat Socialists, their ideology is about what the “leaders” will or won’t do. For the rest of us, it’s about what “citizens” want.

As a side note, doesn’t this explain why the Swamp Lovers and Democrat Socialists are so mentally disturbed about President Trump winning? President Trump has set their plans to overthrow America back at least 100 years! His win in 2020 will drive a wooden stake through their heart.

Please don’t be fooled. Democrat Socialist know this is going to happen due to their fixation on Mueller and impeachment. Their playbook for 2020 is empty and time has run out on inserting new plays.

Regardless, they have already set the stage with President Trump, Georgia, and Florida to deny 2020 election results. After the elections, they will come forth like demons from Hell, with all sorts of frivolous litigation and public protests!

They will continue where Mueller left off to tear America apart, fuel chaos, and remain in power employing the Swamp Rats. Meanwhile, weak-kneed Republicans will grab their blankets, curl into the fetal position, and allow them to run amuck.

Please wake up America, our great President needs people with a spine to help in Congress!

Romans 8:28 -34 And we know that all things work together for good to them that love God, to them who are the called according to his purpose. For whom he did foreknow, he also did predestinate to be conformed to the image of his Son, that he might be the firstborn among many brethren. Moreover whom he did predestinate, them he also called: and whom he called, them he also justified: and whom he justified, them he also glorified. that shall we then say to these things? If God be for us, who can be against us? He that spared not his own Son, but delivered him up for us all, how shall he not with him also freely give us all things? Who shall lay any thing to the charge of God’s elect? It is God that justifieth. Who is he that condemneth? It is Christ that died, yea rather, that is risen again, who is even at the right hand of God, who also maketh intercession for us.

Support Conservative Daily News with a small donation via Paypal or credit card that will go towards supporting the news and commentary you've come to appreciate.
Tags
2020 Election News Democrats liberals socialism