Posted by: R. Mitchell in In The News, Military and Defense, Syndicated Posts, US News June 28, 2019 Comments Off on Navy to Christen Littoral Combat Ship Oakland 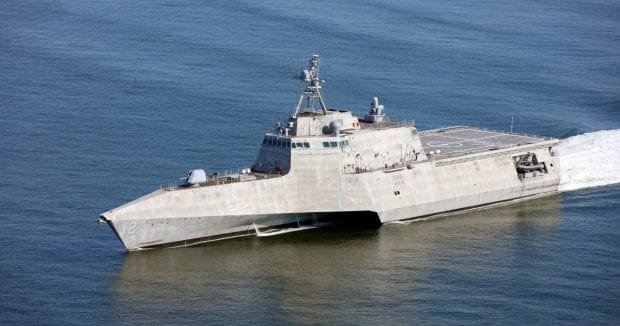 U.S. Representative Ken Calvert of California will deliver the christening ceremony’s principal address. Ms. Kate Brandt, Google’s sustainability officer, will serve as the ship’s sponsor. In a time-honored Navy tradition, Ms. Brandt will christen the ship by breaking a bottle of sparkling wine across the bow.

“The christening of the future USS Oakland marks an important step toward this great ship’s entry into the fleet,” said Secretary of the Navy Richard V. Spencer. “The dedication and skilled work of our industry partners ensure this ship will represent the great city of Oakland and serve our Navy and Marine Corps team for decades to come.”

The future USS Oakland is a fast, agile, focused-mission platform designed for operation in near-shore environments yet capable of open-ocean operation. It is designed to defeat asymmetric “anti-access” threats such as mines, quiet diesel submarines and fast surface craft. The ship will be homeported in San Diego.

The LCS class consists of two variants, the Freedom variant and the Independence variant, designed and built by two industry teams. The Freedom variant team is led by Lockheed Martin in Marinette, Wisconsin (for the odd-numbered hulls). The Independence variant team is led by Austal USA in Mobile, Alabama, (for LCS 6 and subsequent even-numbered hulls).

The future USS Oakland (LCS 24) is the third U.S. Navy ship named for the city in California. The first Oakland (2847) was commissioned in 1918 and used for cargo transport. The second, CL 95, was commissioned in 1942 and during seven years of service was key in many antiaircraft missions across the Asia-Pacific theater of operations.

Tagged with: Littoral Combat Ship the Department of Defense The US Navy USS Oakland