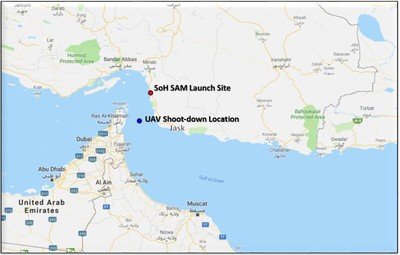 Air Force Lt. Gen. Joseph T. Guastella Jr., the commander of U.S. Air Forces Central Command, said the Iranian action “was an unprovoked attack on a U.S. surveillance asset that had not violated Iranian airspace at any time during its mission.”

Guastella spoke to Pentagon reporters via telephone from the Air Operations Center in Qatar.

The aircraft, which has a wingspan of 131 feet, was on a reconnaissance mission in the Gulf of Oman following last week’s Iranian attacks on oil tankers sailing through the Strait of Hormuz.

U.S. officials maintain that Iran is carrying out the oil tanker attacks to shut down the strategic strait through which a significant percentage of the world’s oil passes.

Guastella said an Iranian Revolutionary Guards Corps unit based in Goruk, Iran, fired the missile that brought down the U.S. surveillance asset. “This attack is an attempt to disrupt our ability to monitor the area following recent threats to international shipping and free flow of commerce,” the general said. “Iranian reports that this aircraft was shot down over Iran are categorically false.”

The remotely piloted aircraft was over the Strait of Hormuz and fell into international waters. “At the time of the intercept, the RQ-4 was operating at high altitude, approximately 34 kilometers from the nearest point of land on the Iranian coast,” Guastella said. “This dangerous and escalatory attack was irresponsible and occurred in the vicinity of established air corridors between Dubai, United Arab Emirates, and Muscat, Oman, possibly endangering innocent civilians.”

Navy explosive ordnance officials in the United Arab Emirates presented the evidence they found during an inspection of the damage to the Japanese tanker M/V Kokura Courageous. “I can tell you now that it is [U.S. Naval Forces Central Command’s] assessment that the attack on M/V Kokuka Courageous and the damage that was caused was a result of limpet mines that were attached to the skin of the ship,” said Navy Cmdr. Sean Kido, commander of Task Group 56.1.

“What I can tell you is that the limpet mine that was used in the attack is distinguishable and is also strikingly bearing a resemblance to Iranian mines that have already been publicly displayed in Iranian military parades,” he said.

‘Coats For Kids’: DC Police, Knights Of Columbus Distribute Coats To ‘The Most Vulnerable Members Of Our Society’