Last week’s Democrat primary in Virginia’s Fairfax and Arlington Counties was great news for companies whose business model includes cleaning human poop off the sidewalk. The sanctimonious leftists in both counties just nominated new prosecutors who plan on increasing justice by ignoring crime. 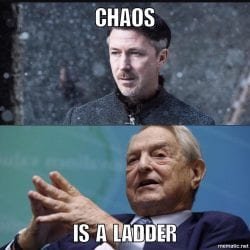 The $583,000 that Soros gave Tafti represented 78 percent of her total campaign budget. The $392,000 George sent Descano was marginally less at 71 percent of his budget. In those two true blue counties winning the Democrat primary means winning in November, too.

So, what did Soros buy? Two more DAs who won’t be prosecuting “quality of life” crimes. This means that in Northern Virginia, just like in San Francisco, pooping in public, being drunk in public, camping in public, sleeping in public, shooting up in public and waving your pubes in public will no longer be illegal.

These “reform” DAs also won’t ask for the death penalty, won’t prosecute for “minor property crimes” and will be working as hard as they can to end “mass incarceration.” I can’t think of another elected office where the winner got there by promising he will take a laid–back approach to performing the duties of office.

Maybe you’re skeptical and wondering just how bad could it really be living under a Soro’s DA? Cook County State’s Attorney Kim Foxx — the woman who broomed the charges pending against racial incident hoaxer Jussie Smollett — was a $408,000 addition to the Soros CollectionTM.

The politically naïve will contend the two new Virginia DAs — who between themselves have never tried a criminal case in state court —told the Washington Post both campaign’s issues were “use[ing] their discretion to no longer prosecute marijuana possession, ask for cash bail or pursue the death penalty. They said they would expand efforts to keep nonviolent offenders out of jail and charge in ways that lead to lower sentences across the board.”

Nothing about sidewalk BMs and discarded syringes there. That is true. And that is irrelevant.

Soros knows exactly how Tafti and Descano will operate in office because his PAC interviewed them in person. If both of these worthies weren’t chapter and verse on the Soros Soft on Crime program, George never would’ve cut a check. What they said in private to Soros’ operatives and what they fed the public only bear a slight resemblance.

In addition, Descano explained to Inside Nova that he “would not charge theft of property under $1,500 at the felony level.” And Tafti quoted, in Bacon’s Rebellion, is appalled that “Arlington produces felony convictions at two to three times the rate of neighboring counties despite having less crime.”

Watching where they step on the sidewalk will be the least of Arlington and Fairfax county residents problems in the near future. Wait until someone breaks into Buffy’s Prius and steals her airbag and stash of granola bars. Buffy’s not going to be happy when she learns fighting “mass incarceration” doesn’t involve fighting street crime.

Speaking of “mass incarceration” Michele Hanisee, President of the Association of Los Angeles Deputy District Attorneys, corrected another Soros’ candidate on that topic, “…as of 2016, 91 percent of state prison inmates are serving time for a violent, serious or sexual offense.”

Those aren’t black teenagers caught taking a toke or shoplifting Juul cartridges. Those are hardened criminals and if they’re back on the street in California or Virginia you will be reading about them sooner or later.

Another characteristic of Soros’ DAs is mass firings when they do take office. If I were a prosecutor in either county I would not be taking on any long–term financial commitments.

As the LA Times reported, “In Philadelphia, Soros financed DA Larry Krasner fired 31 DDA’s in his first week of office; nearly one-third were in the homicide unit and included a prosecutor set to begin a murder trial the following Monday …In Houston, the Soros financed DA Kim Ogg …fired 37 veteran prosecutors in pursuit of her “culture change.”

The Post assures voters neither Laurel nor Hardy, excuse me, Tafti or Descano “has plans to fire career prosecutors.” But Descano muses, “the question is, can these individuals can get on the program with reform?”

I’m guessing the answer will be no.

Both Tafti and Descano want to re–write the law without bothering to go to Richmond. If a conservative did this, it would be called ‘tyranny.’ When leftists do it, the term is ‘reform.’