A dispute between two leading figures in the deep state has erupted.

As a result, they’re already turning on each other and doing their best to get ahead of an investigative report from Department of Justice Inspector General Michael Horowitz.

For example, Comey and Brennan are at each other’s throats over who pushed the dossier.

Former top FBI attorney Jim Baker had this to say about Comey: Senior FBI officials were concerned then director James Comey would appear to be blackmailing then President-elect Trump – using tactics notoriously associated with J.Edgar Hoover – when he attended a fateful Jan. 6, 2017, meeting at which he informed the real estate magnate about allegations he had consorted with prostitutes in Moscow, according to Jim Baker, the bureau’s chief counsel at the time.

I seem to remember that when AG Eric Holder was held in contempt of congress for REFUSING to provide the records pertaining to Fast ‘n Furious not a Democrat complained and when Obama used executive privilege to circumvent congress in the matter, not a sound was heard from ANY Democrat!! But now they are crying like the ignorant babies they are.

As Fox commentator Katie Pavlich recently said “ The  Comey vs. Brennen vs. Clapper  vs. Lynch vs. Obama is going to be awesome to watch .”
Katie is absolutely right .the political dimwits are turning on each other to save their own skins.

President Trump issued a grave warning Friday to those who allegedly “spied” on his 2016 campaign, calling their actions “treason” and saying “long jail sentences” are in order.

“My Campaign for President was conclusively spied on. Nothing like this has ever happened in American Politics. A really  bad situation. TREASON means long jail sentences, and this was TREASON!” Trump tweeted.

Trump’s claim that the campaign was “conclusively” spied on follows Attorney General Bill Barr’s testimony that “spying did occur” against the Trump campaign in 2016.

Meanwhile, William Barr is growing to become the Democrats biggest nightmare. In a recent interview with Fox News, Attorney General Bill Barr insisted government officials must be investigated to see if there has been an abuse of power. He added “a lot of the answers have been inadequate, and I’ve also found that some of the explanations I’ve gotten don’t hang together.” 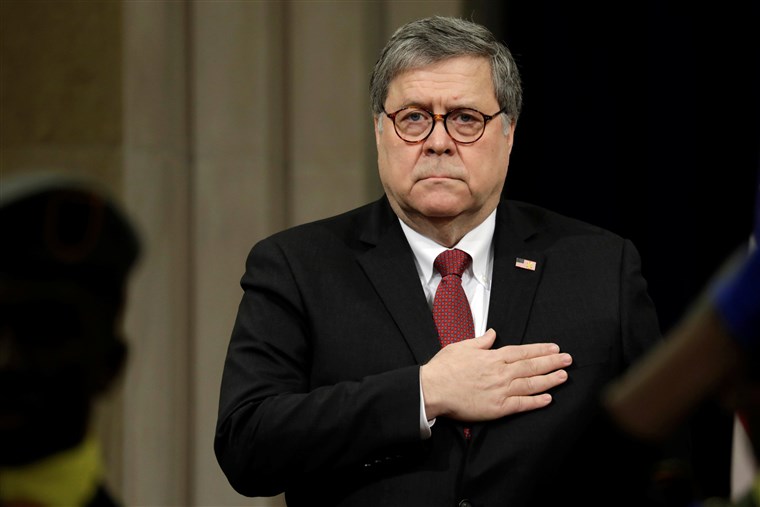 Barr has ZERO fear of the Left’s threats. It’s as if he doesn’t have a care in the world that the House Dems have not only held him in contempt, but have threatened to put him in jail. It’s funny how, when you’ve got the rule of law behind you, it doesn’t matter what the leftists THINK should happen…When push comes to shove — they’re powerless — and Barr just reminded them of that.

Recently, the National Peace Officers’ Memorial Day service was held at the Capitol. Both Barr and Pelosi were waiting for the president to arrive to the proceedings…While both were waiting in the holding tent, our attorney general walked over to Pelosi and said loudly, “Madam Speaker, did you bring your handcuffs?”Can you imagine the set of brass cojones on Barr that enabled him to walk up to the speaker of the house, the person who’s third in line for the presidency, and openly mock her to her face? If he hasn’t proved that he is absolutely the right man for the job yet…He just did.

Trump Was RIGHT to Select Barr. Pelosi was obviously taken aback by Barr’s comments — but in a show of quasi-authority, she let Barr know that the house sergeant-at-arms was present at the ceremony and had the handcuffs needed to make an arrest — should one be necessary. At this, AG Barr simply laughed in her face and walked away.

This may be even bolder than the quip…As laughing in somebody’s face and walking away shows total disregard — not only for that person’s authority — but a disregard for the person as well. Pelosi was said to have laughed it off — but those in the tent have whispered that she was visibly annoyed and stewed about the quick jab.

It’s now apparent WHY Trump selected Barr as the attorney general. He’s in the same vein as Trump — hard-nosed and not scared of a fight…

Imagine if Barr had held the position the whole time instead of that wimp Sessions? The Mueller investigation would have been over MONTHS earlier.

Here’s the thing…What can the House really do? Barr hasn’t broken any laws.

Well, obviously not if you ask Nancy Pelosi — who said that AG Barr somehow lied to her and Congress about the Mueller report…But what makes her believe that?

But Nancy What did he lie about? What was the fabrication? What lie did Barr make up that should be considered a crime?

He didn’t…Which is why you didn’t elaborate on what he lied about. You just wanted to make the American public doubt him plain and simple. It was political posturing to say that he lied. Americans know that and so does AG Barr — which is why he felt so comfortable mocking you and laughing in your face.

The tide is turning, Madam Speaker…America is waking up the Dems’ shenanigans.

.I want to see these people do some prison time and NOT in a posh white coller resort! These people are crooked, conniving people. They tried to subvert our duly elected President…yes, he won fair and square even with all the cheatng. They ALL deserve long prison time…Comey, Clapper, Powers, Strzok, Page, McCabe, Lynch, Bill Clinton for colluding with Lynch on the tarmac, Hillary Clinton for paying for the dossier and obstructing justice with her bleach bitting e-mails and destroying devices, Rice for lying, and Brennan…ESPECIALLY BRENNAN… Especially Brennan! Send them ALL to prison. They were and are all treasonous and corrupt,

Support Conservative Daily News with a small donation via Paypal or credit card that will go towards supporting the news and commentary you've come to appreciate.
Tags
James Comey John Brennan Spygate