Posted by: R. Mitchell in Military and Defense, Syndicated Posts, US News April 24, 2019 Comments Off on Navy to Christen Expeditionary Fast Transport Guam 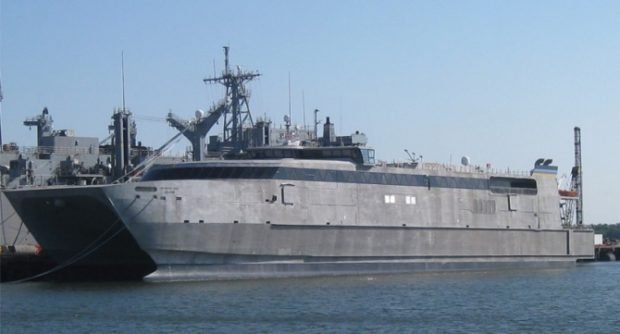 USNS Guam is named to honor the long-standing historical and military relationship between Guam and the United States. She will be the fourth ship to bear the name Guam.

Ambassador Extraordinary and Plenipotentiary of the United States of America to the Republic of Korea Harry B. Harris Jr. will be the principal speaker, and Mrs. Bruni Bradley, a 25-year Navy veteran and wife of Harris, will serve as the ship’s sponsor. In a time-honored Navy tradition, she will christen the ship by breaking a bottle of sparkling wine across the bow.

“This ship honors the island of Guam and the important contributions Guamanians have made to our nation and our Navy and Marine Corps team,” said Secretary of the Navy Richard V. Spencer. “For decades to come, USNS Guam and its crew will carry on the Guamanian tradition of service by providing our commanders with much needed high-speed sealift mobility and agility.”

Long before Guam joined the U.S. as a territory, the island had a military relationship with the United States. The long-standing historical and military relationship between Guam and the U.S. began in 1898 when the U.S. acquired the island from Spain as a result of the Treaty of Paris that ended the Spanish-American War. Shortly after the attack on Pearl Harbor, the Japanese captured Guam, and they occupied it until U.S. troops retook the island July 21, 1944, commemorated in Guam every year as “Liberation Day.” Guam continues to host many critical U.S. military installations.

USNS Guam is an aluminum catamaran designed to be fast, flexible and maneuverable, even in austere port conditions, making the vessel ideal for transporting troops and equipment quickly. USNS Guam’s 25,000-square-foot mission-bay areas can be quickly reconfigured for any cargo requirement, from supporting disaster relief to transporting troops and equipment. This vessel was originally built for Hawaii Superferry, but was never delivered. The ship, then named Huakai, was purchased at auction by the U.S. Department of Transportation’s Maritime Administration, along with its smaller sister ship, the Alakai, for $10 million in 2010.

In 2012, both the Alakai and Huakai were transferred to the U.S. Navy and both were renamed the USNS Puerto Rico and USNS Guam respectively.

The ship is preceded in service by the patrol gunboat USS Guam (PG 43), which was renamed Wake in 1941 and captured by the Japanese later that year, the Alaska-class large cruiser USS Guam (CB 2) in service 1944-1947, and the Iwo Jima-class amphibious assault ship USS Guam (LPH 9) in service 1965-1998.