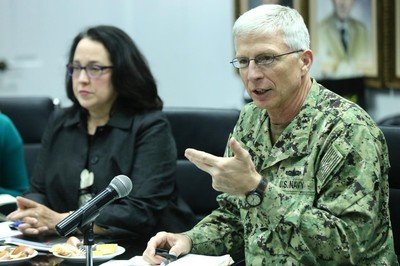 Southcom’s area of responsibility includes Latin America south of Mexico, the waters adjacent to Central and South America, and the Caribbean Sea.

Faller said his top concern is Venezuela, where “the situation is dire. [Nicolas] Maduro’s illegitimate government starves its people by using food as a weapon, while corrupt generals are rewarded with money from illegal drug trafficking, oil profits and businesses, all at the expense of the population and the rank and file military.”

The U.S. is building strong partnerships with Southcom nations, Faller said, noting that these partnerships are not just military to military, but are also diplomatic partnerships by the State Department and by other organizations, such as the U.S. Agency for International Development and the departments of Justice and Homeland Security.