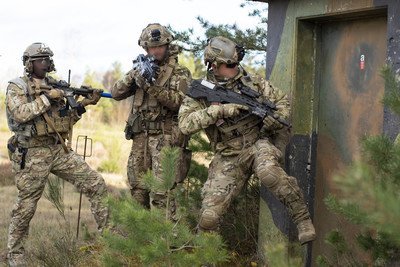 More than 5,500 soldiers from 16 nations, including special operations forces from five nations, were at the Joint Multinational Readiness Center in Hohenfels, Germany, Dec. 1-11, for exercise Combined Resolve XI.

The exercise series is led by U.S. Army Europe and is focused on improving readiness and interoperability amongst allies and partners, incorporating U.S. rotational units aligned under Operation Atlantic Resolve.

Atlantic Resolve is a demonstration of the strong and unremitting U.S. commitment to NATO and Europe.

Since April 2014, U.S. Army Europe has led the Defense Department’s Atlantic Resolve land efforts by bringing units to Europe for nine months at a time. About 6,000 soldiers are participating in Atlantic Resolve at any given time.

Editor’s Note: The faces of the special operations soldiers in these photos have been blurred for security purposes.