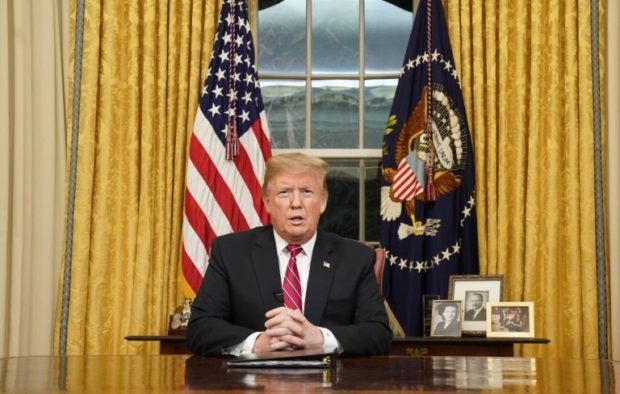 President Trump spoke on Tuesday night from the oval office on the importance of the Border Wall.  House Speaker Nancy Pelosi and Senate Minority Leader Charles E. Schumer signaled disappointment with the networks’ decisions to grant the president a slot at 9 p.m. Tuesday for a brief address to the nation and again blamed him for the partial government shutdown that’s now in its third week.

“Now that the television networks have decided to air the President’s address, which if his past statements are any indication will be full of malice and misinformation, Democrats must immediately be given equal airtime,” they said in a joint statement.

The minority party is usually granted time after major addressed such as a state of the union speech, though reactions to short presidential addresses to the nation are usually less structured.

In Tuesday night’s speech from the oval office, Trump gave a compelling argument for the border wall. He cited that in 2017-2018 criminal aliens have been responsible for 100,000 assaults, 30,000 sex crimes and 4000 homicides. In 2018 17,000 adults have been arrested at the border with criminal records and that 300 Americans die each week from heroin that is coming from over the border.

He said the Wall will pay for itself many times over and said we have no choice, We have to have a Wall, it will stop drugs and human trafficking, He said the people who are not getting a paycheck now agree with him and said it is a national emergency with the Wall,

Trump proposed having more agents, a steel barrier wall not concrete, immigration lawyers, medical assistance and advanced technological surveillance equipment. Trump said this will cost 500 billion dollars and the wall will pay for itself through the new alliance with Mexico. So far the dems have refused to supply funds for the wall which Trump is asking 5 billion for.

Trump said the dems should pass the spending bill and get this done so the government can re-open. He said it would take about 45 minutes. Trump cited many people who had family members killed by illegals and said the government remains shut down because dems will not fund border security.

During Obama’s tenure, Pelosi, Biden, Schumer, Obama, Hillary and Diane Feinstein all spoke about the importance of having a wall and asked 25 billion for it. Now that Trump is in office they are refusing it.

In their rebuttal to Trump Pelosi and Schumer both accused trump of stoking fear and accused him of manufacturing a crisis.

They should try talking to the recent families who had loved ones killed or the 100,000 victims of assault and the 300,000 victims of sex crimes and ask them if they think this is a manufactured crisis.

Schumer and Pelosi said that Trump should re-open the government so they can negotiate and mentioned the thousands who won’t be able to get a mortgage or buy a car or put food on the table.

“The President of the United States – having failed to get Mexico to pay for his ineffective, unnecessary border wall, and unable to convince the Congress or the American people to foot the bill – has shut down the government,” Schumer said in a response delivered jointly with House Speaker Nancy Pelosi, D-Calif. “American democracy doesn’t work that way.  We don’t govern by temper tantrum.”

Schumer called on Trump to approve legislation ending the partial government shutdown while allowing debate over border security to continue.

In her remarks, Pelosi said the president’s statements during the partial shutdown have been “full of misinformation and even malice,” and accused the administration of practicing “cruel and counterproductive policies” at the southern border.

“The fact is: the women and children at the border are not a security threat, they are a humanitarian challenge,” said Pelosi, adding that “President Trump must stop holding the American people hostage, must stop manufacturing a crisis, and must re-open the government.”

Democrats value illegals over Americans ! Poor Chuckie! Poor Nancy! The orchestrators of this shutdown are starting to feel the heat. With them it’s only about obstructing Trump. It’s only about winning on the wall funding.. They seek power only for themselves and NOT the American people!

These workers will all get their back pay coming to them when this is over and this is only a partial shutdown with just non essential workers temporarily laid off.

While all this is going on Democrats like Cory Booker and other angry libs are saying Trump lies all the time and doesn’t keep his promises. It is they who are lying about Trump to make it look like he is lying. I guess they forgot about bill Clinton who was a stranger to the truth and said “I didn’t lie, I mislead. There is a difference.” or how about when Obama told the country if they like their plan and doctor they can keep them and 5million people lost their plan and doctor. So don’t go saying Trump lies all the time.

Trump doesn’t outright lie, he may exaggerate and emphasize things so it seems like a lie to feckless dems, but that’s not like previous presidents.  Maybe he should say like Bill Clinton did, “I didn’t lie I misled.” Trump has kept all of his promises and at his rallies there are signs that say “Promsies made, Promises kept.”

In a recent press conference in the Rose Garden trump said the steel industry was dying, and said he saved the steel industry by calling the President of US Steel and convinced him  to build more steel plants here which they are doing.,  He said he has tremendous support from the Republican party,

He said the Democrats are playing games, and said a lot of work has been done, He said don’t just build the Wall, finish the Wall.and  said we will see what happens with DACA. He said they won’t give the President the power that President Obama had, He said this shutdown could end tomorrow or could go on a long time, He said it is dependent on the Democrats, He said there are big surges of people are coming over the border and said it is his fault, because he created a great economy and they want jobs,

He said our economy is great, and we are getting interest now.  He said Obama got no interest, He said Obama was playing with funny money. He said the China deal is great, He said China’s economy is down by 38 percent, He said now we are doing great with N Korea and we have a great dialog with them, He said the previous administration would have been in war with them if he weren’t elected, In fact, China and North Korea were teaming up against us with Kim firing rockets over Guam and Japan. Trump intervened and stopped that. He said Iran is doing poorly, once he took the nuclear deal off and now Iran wants to talk,

He said we are decimating Isis. We wiped out Isis in Iraq. We are helping other counties when we fight Isis, We are helping Russian and Iran since they hate Isis.

He said he will be making the State of the Union on Jan 29th,

Our trade deals are going great. He said we are doing better than any other country under him. We have a deal with Mexico and Canada and China under him and