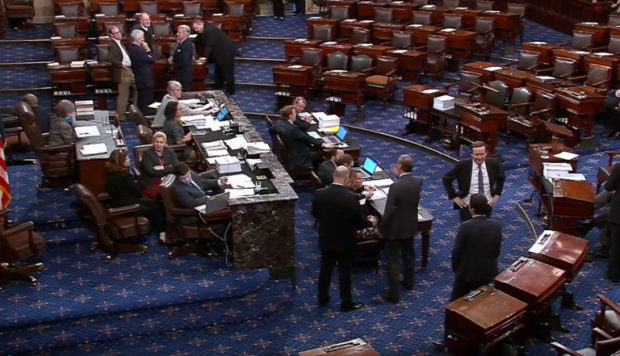 The U.S. Senate rejected two bills to re-open the government, one favored by Republicans and the other by Democrats both of which failed to get the required 60 votes to end debate.

The Democrat favored bill, already passed by the Democrat-held House, was defeated largely along party lines in a 52-44 vote. Six Republicans voted for the bill:

The Democrats’ funding measure would have only opened the government for a few weeks which would have led to another shutdown in February. The bill also provided no additional funding for border security as requested by the Border Patrol, DHS and President Trump.

Even if the bill had passed the Senate, the president has already signaled that he would veto any legislation that did not contain funding for a physical barrier at the border.

The Republican-sponsored measure, an amendment to H.R. 268, met a similar fate failing to pass in a 51-47 vote. One Democrat, Joe Manchin (WV), voted for the bill.

The bill, also favored by President Trump, funded the government for the entire fiscal year, included humanitarian aid, an extension of DACA and TPS for three years, and the funding that border agents have been desperately seeking.

Democrats have indicated that they have no intention on providing the physical barriers that the border patrol has asked for and Republicans have said that they won’t vote for anything that doesn’t include such funding. Still at an impasse, Congress has managed to keep 25% of the government shut down for at least one more day.

Now, members of Congress from both sides are meeting behind closed doors to hammer out something that might garner enough votes from both parties.

Support Conservative Daily News with a small donation via Paypal or credit card that will go towards supporting the news and commentary you've come to appreciate.
Tags
government shutdown