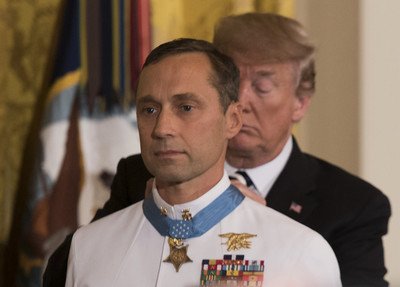 March 4, 2002, was a deadly day for American troops on a mountaintop mission in Afghanistan. Several men lost their lives, but two earned the nation’s highest honor for their bravery and leadership. One of them was Navy Master Chief Petty Officer Britt Slabinski, a SEAL.

Slabinski grew up in Northampton, Massachusetts, and was a high achiever from the start, becoming an Eagle Scout at 14. He immediately joined the Navy after graduating high school in 1988 and wanted to become a SEAL — something he made a reality two years later. During his 25 years in the Navy, Slabinski deployed 24 times — 15 of which were combat assignments for operations supporting the war on terror.

In the early morning of March 4, 2002, Slabinski found himself on one of those deployments in Afghanistan. The then-senior chief was leading a reconnaissance team onto the top of Takur Ghar, a 10,000-foot snowy mountain, to set up a post where they could report on the movement of al-Qaida terrorists. But as their insertion helicopter went to land, it was hit by an enemy rocket-propelled grenade. Slabinski’s SEAL teammate, Petty Officer 1st Class Neil Roberts, fell out onto the enemy-infested mountaintop shortly before the chopper crashed in the valley below.

Without hesitating, Slabinski boarded another helicopter and led his remaining teammates back up the mountain to save Roberts, despite the overwhelming number of enemy fighters entrenched at the top.

Through heavy snow and machine gun fire, the second chopper was able to land safely. Slabinski and Air Force Tech Sgt. John Chapman immediately charged an enemy bunker, killing the insurgents inside and taking it for themselves.

The gunfire continued from a second location 60 feet away. Slabinski and Chapman took aim at that bunker, charging back into a hail of gunfire to attack it and other enemy positions. But more of their teammates were getting wounded, and they were running low on ammunition, so they needed to look for cover elsewhere.

Slabinski led the team to a more defensible position, where he radioed in for reinforcements and close-air support while helping his wounded teammates.

Their position started getting hit with fire again, so they were forced to move further down the mountainside. Slabinski led the survivors across rough terrain, carrying one of his seriously wounded teammates through waist-deep snow. He continued to call in for support as the enemy kept firing on them.

It took 14 hours for the team to be extracted. While they waited, Slabinski continued to fight and helped stabilize the injured men on his team. His dedication, bravery and tactical leadership through this arduous assault made him worthy of the nation’s highest award for valor.

But it took 16 years for him to get it. He was initially awarded the Navy Cross for his actions before it was upgraded to the Medal of Honor.

In a ceremony at the White House on May 24, 2018, President Donald J. Trump put the medal around Slabinski’s neck. The former SEAL was quick to give credit to the men who lost their lives: Roberts, who fell out of the helicopter; Chapman, who joined Slabinski on that last push up the mountain; as well as Air Force Senior Airman Jason Cunningham, Army Cpl. Matthew Commons, Army Sgt. Bradley Crose, Army Spc. Marc Anderson and Army Sgt. Philip Svitak.

“This Medal of Honor belongs to the seven Americans killed in action on that mountain top: Neil, John, Phil, Marc, Matt, Brad and Jason,” Slabinski said during the White House ceremony. “They gave all, for all of us. This honor is yours, for you are the true heroes.”

That August, Chapman’s Air Force Cross was posthumously upgraded to the Medal of Honor for his role in their defense at Takur Ghar.

Slabinski continued his Navy career for many more years, retiring in 2014. He now works for himself and raises his son, who followed his footsteps to become an Eagle Scout.

Learn more about Slabinski’s actions and his recollections from that time here.